Greg Olsen Could Holdout In Search of New Contract 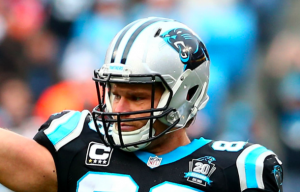 One of the best tight ends in football may be a holdout when training camps get underway. Carolina Panthers tight end Greg Olsen mentioned at minicamp last week his desire for a new contract. On Wednesday, he admitted that holding out has not been ruled out as an option to make that happen. There appeared to be no malice in Olsen’s words while speaking with ESPN’s Adam Schefter on Wednesday. But he says he is looking for a contract that matches his productivity on the field.

Olsen is set to make $6.5 million in each of the next two seasons. He will become a free agent following the 2018. But he doesn’t feel like waiting that long to score a more lucrative contract. His current contract makes Olsen just the seventh highest paid tight end in the NFL. Based on his product in recent years and what he’s meant to the Panthers, it’s easy to see why he believes he should be paid more.

Olsen has eclipsed 1,000 yards receiving in each of the last three seasons. He’s the first tight end in NFL history to do so in three consecutive years. Olsen was also a Pro Bowler in all three seasons and a second-team All-Pro selection in each of the past two seasons. He was also an invaluable part of the Panthers reaching the Super Bowl two seasons ago. Perhaps equally important, he’s played 16 games per season in each of his six years in Carolina.

Despite threatening to holdout, Olsen insists he doesn’t have a problem with the Panthers. The 10-year veteran merely says that he wants a contract that will “reflect my productivity” over the last three years.

“This is not a negative environment,” Olsen told Schefter. “I’ve gone to all the OTAs, to all the minicamps. This is not by any means a toxic environment or a situation where the two sides seem fighting or anything like that. Has nothing to do with that. It’s just strictly, business should reflect productivity.”

Olsen has not said that he will definitely holdout if he doesn’t have a new contract before training camp. But he recognizes that it may be a tactic he can use to bring the Panthers to the bargaining table in his quest for a new deal.

On the surface, giving a new, long-term contract to a 32-year old tight end doesn’t seem like a smart business move by the Panthers. However, Olsen has displayed incredible health and longevity over his decade in the NFL. He also feels like he has a lot left in the tank.

The 2017 season will be Olsen’s 11th in the NFL. But he believes he can play many more and has no intention of walking away from the NFL when his current contract is up in 2018.

“I’m under contract through Year 12,” Olsen said. “Obviously I’d like to get through that, and if all things stay as they are, I think I can play 15-16 years”

If Olsen is able to lasts 15 years, he’ll have played through at least the 2021 season. Considering his production in recent years and status on the team as a leader, the Panthers would be wise to make sure he spends those years in Carolina. Yielding to the contract demands of a player Olsen’s age isn’t typically good business. But in this case, renegotiating Olsen’s contract may be the right move for the Panthers.