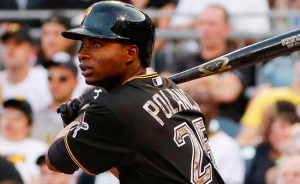 The Pittsburgh Pirates just can’t catch a break in 2017. One player has been lost for half the season with a PED suspension, one player is unable to get a visa to enter the country, and one of their starting pitchers has been sidelined with testicular cancer. Now a hamstring injury is sending one of their brightest young stars to the DL. The Pirates placed outfielder Gregory Polanco on the 10-day DL Wednesday with a strained hamstring. The move is retroactive to Monday and is the first time Polanco has gone to the DL since coming to the majors in 2014.

Polanco initially suffered the injury on Sunday, as he pulled up lame on his way to first base after hitting a routine ground ball. Following an off day on Monday, Polanco was held out of Tuesday’s game, even as the Pirates held out hope that he would be able to return sooner rather than later. However, after further evaluation, the club has decided to put him on the DL.

“We’re continuing to get many new opportunities disguised as challenges,” Pirates manager Clint Hurdle said of all the players missing from the team’s active roster. “Got to play on.”

Polanco is not quite replicating the breakout season he had last year. Thus far, he has just one home run on the season after hitting 22 long balls in 2016. Nevertheless, his presence in Pittsburgh’s outfield is vital, especially with Starling Marte serving an 80-game suspension, as the Pirates have little outfield depth. Since Marte was suspended, the Pirates have utilized mostly infielders and utility players to play the third spot in the outfield alongside Polanco and Andrew McCutchen, who is having another disappointing season offensively.

Just as they did when Marte was suspended, the Pirates have once again declined to call up top prospect Austin Meadows to fill an opening in their outfield. Meadows has struggled to get it going offensively in triple-A this season, and so the Pirates have decided not to rush his development, even though the team is now missing two of its opening-day outfielders.

Instead of calling up Meadows, the Pirates have called up outfielder Danny Ortiz, who is yet to experience his first big league at-bat. Ortiz was with the club earlier this season and spent three innings in right field but did not make a plate appearance. The Puerto Rican native was hitting .253 with an OPS of .599 at triple-A this year.

“He’s a good defender,” Hurdle said of Ortiz. “We brought him up earlier in the season and unfortunately with the catching situation we had to turn him right around and send him back.”

However, it remains to be seen how much Ortiz will be utilized despite the Pirates lacking true outfielders. Adam Frazier, Jose Osuna, and John Jaso could all see time at the two vacant corner outfield spots with McCutchen playing center field. Frazier has spent a lot of time in left field since returning from the DL last week, while the Pirates appear poised to give Jaso an opportunity in right field, although he’s hitting just .162 this season.

As for the Pirates, they are already in last place in the NL Central and struggling to stay relevant in what is an otherwise tight division race. Even if Polanco only misses the minimum of 10 days on the DL, which is Pittsburgh’s hope, it’s another significant setback for the Pirates, a team that can’t afford too many more setbacks this year.