Hanley Ramirez To Start Playing First Base for Red Sox 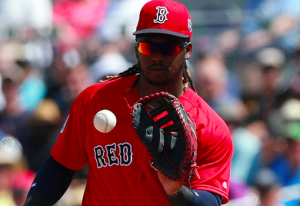 After more than a month of serving exclusively as a designated hitter, Hanley Ramirez is ready to pick up a glove and play the field. With the Boston Red Sox set to begin a series in a National League park against the Milwaukee Brewers Monday night, the DH won’t be available, forcing the Red Sox to put Ramirez in the field in order to get his bat in the lineup.

The Red Sox originally intended for Ramirez to get playing time at first base this season, primarily against left-handed pitchers, essentially putting him into a platoon with Mitch Moreland. However, Ramirez suffered a shoulder injury in early March that forced the Red Sox to alter their plans at first base. But the time has come for Ramirez to spend time in the field, even with Moreland off to a good start, hitting .281 with an OPS of .834 early in the season.

“Mitch has done a great job,” says Red Sox manager John Farrell. “This is his first real opportunity of playing every day, and he’s done just that, played every day. But I think it’s important we’re able to pick spots to keep him as fresh as possible. That’s been our goal since we reported to spring training (to play Ramirez at first base), and yet we’re still trying to get there.”

Ramirez may not love the idea of playing first base, but he should be somewhat comfortable with the position after starting 133 games there last year. With David Ortiz still entrenched as the DH and Boston’s outfield full of budding stars, the Red Sox had no choice but to put Ramirez at first base in 2016. Of course, those 133 games are the sum of his experience as a first baseman, and after being sidelined with the shoulder injury during spring training, it’s possible that Ramirez will be a little rusty.

“There’s been ground balls taken and there’s been some short throws there,” Farrell said. “Enough to make him capable and prepare him for it. I think for any of our guys, you’re always looking for more.”

Fortunately for the Red Sox, they have the reigning American League Gold Glove winner at first base in Moreland, giving them the option of taking out Ramirez for defensive reasons late in games.

“I can see us in a situation where we can be mixing and matching out there,” Farrell said. “If Hanley starts a game where Mitch picks him up defensively later on, that’s certainly a possibility. So, all those combinations are available to us.”

Aside from playing first base in National League ballparks, it’s unclear how much action Ramirez will see at first base going forward. However, there’s no denying the Red Sox could stand to benefit from Ramirez being able to start at first base when they face left-handed pitchers. To be fair, Moreland has held his own against lefties this year, while somehow Ramirez is just 1 for 12 against southpaws.

Nevertheless, Ramirez being able to spend some time at first base could allow the Red Sox to give other players at-bats at the DH spot, most notably Chris Young, who has been one of the most productive hitters in baseball against lefties over the past couple of years. Having Ramirez occupying first base once or twice a week could also help the Red Sox rotate different players into the DH spot to give them a break without losing their bat from the lineup.

Obviously, Ramirez isn’t going become Boston’s primary first baseman, and most of the time, one would expect Moreland to enter the game in the late innings if the Red Sox have a lead. However, being able to play Ramirez at first base on occasion will add some versatility to Boston’s roster, which could prove valuable over the course of the season. In a division as competitive as the AL East, it’s important for the Red Sox to find an edge any way they can.