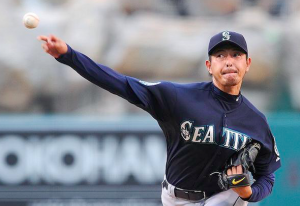 Things continue to go from bad to worse for the Seattle Mariners, particularly when it comes to their starting rotation. Just days after Hisashi Ikwakuma became Seattle’s fourth starting pitcher to be placed on the DL this season, the Mariners announced that inflammation in Iwakuma’s right shoulder will keep him sidelined for the next four to six weeks, a significant blow to a team whose pitching staff has had to endure injury after injury this year.

Iwakuma says he experienced soreness in his shoulder for his last few starts prior to going on the DL this past Wednesday. He also had one of his starts earlier this month pushed back due to a knee bruise he suffered when he was struck by a line drive. In six starts this season, Iwakuma is 0-2 with a 4.35 ERA. Those numbers aren’t spectacular, but Iwakuma was helping to provide some stability in Seattle’s rotation amidst injuries to Felix Hernandez, Drew Smyly, and James Paxton.

“I’m optimistic it’s more toward the four-weeks side of things,” Mariners manager Scott Servais said of the prognosis for Iwakuma. “But you never know. It’s kind of surprising. I wasn’t expecting it to be that long, but our doctors looked at him and thought it was best to put that time frame on him.”

With Iwakuma joining Hernandez, Smyly, and Paxton, Yovani Gallardo is the only pitcher in Seattle’s rotation who was actually projected to be part of the starting five when spring training began. The Mariners have struggled to find viable replacements for their injured starters, and as a result, their rotation ranks among the worst in the American League in ERA.

“Four out of five,” Servais mused earlier this week. “I haven’t (seen anything like it). But I’ve said many times early this year and I’ll say it again. They keep playing our games. We have to play our schedule. We have to keep going. Our team is very resilient. The guys like each other, they play hard and keep grinding. Lately, our bullpen has been really good to keep us in games and let our offense rally. Everybody just has to do their part.”

It’s not just that the Mariners can’t keep their pitchers healthy, it’s that nearly all of them have suffered long-term injuries. Smyly strained his elbow late in spring training and is unlikely to return before the all-star break. Hernandez has been sidelined with a shoulder issue since late April. His rehab has been slow and it’s unlikely he’ll return until at least June. Paxton last pitched on May 2 because of a forearm strain and appears to be at least a couple weeks away from returning. Now Iwakuma is set to miss at least a month of action.

When fully healthy, the Mariners have a rotation that’s capable of being one of the better rotations in baseball. But with so many injuries, Seattle is now relying on a rotation that includes Gallardo, Ariel Miranda, Chase De Jong, Christian Bergman and Ryan Weber. Outside of Gallardo, that group has just 43 career major league starts combined, exemplifying profound inexperience in what’s left of Seattle’s rotation.

Despite their four best starting pitchers currently on the DL, the Mariners have done well to tread water to this point in the season. Heading into Saturday, the Mariners were just two games under .500. However, one has to wonder how long they can remain within striking distance of a playoff spot with long-term injuries to key pitchers continuing to pile up. There’s only so much the Mariners can do to compete until their starters get healthy.

For now, all the Mariners can do it wait. As Servais puts it: “You’re hoping you somehow just stay afloat until everybody does get healthy.”