Published on June 4, 2016 by Bryan Zarpentine 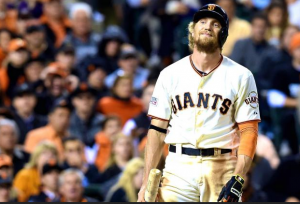 Losing outfielder Hunter Pence to a hamstring injury earlier this week was a big blow to the San Francisco Giants, but the news got even worse on Friday when the team received the prognosis on the injury. As it turns outs, the injury will require Pence to undergo surgery that will cause him to miss at least eight weeks.

Pence was hurt running to first base Wednesday during the team’s loss to the Atlanta Braves, just days after returning from a minor hamstring injury that did not require a trip to the DL. On Friday, he learned that he’ll need surgery to remove a torn tendon in his right hamstring. The Giants are still seeking alternative opinions from doctors and won’t announce the surgery officially until they do their due diligence.

The exact recovery time for the surgery can vary based on what surgeons find and how quickly the 33-year old Pence is able to heal, but eight weeks is the current estimate. Still, Pence is trying to remain upbeat about things. “The good news is there’s going to be a lot of season left to play when I come back,” Pence said Friday. “So there’s a lot to look forward to. That is exciting.”

Pence said there was a chance he could rehab the injury without surgery and be back sooner than eight weeks, but that a setback at any point would lengthen the recovery time even more, so he opted for the surgery in hopes of being back for the final two months of the season. Pence is currently hitting .298 with seven home runs and a team-high 36 RBIs. He’s in the midst of his most productive season since coming to San Francisco in 2012.

San Francisco manager Bruce Bochy says rookie Jarrett Parker will get most of the playing time in right field, at least until Angel Pagan returns from a hamstring injury in another week or so, at which point Gregor Blanco can shift over to right field. Bochy says Mac Williamson and utility man Kelby Tomlinson are also options. However, even when Pagan gets back, the Giants will still be light on outfield depth, barring one of their younger players stepping up. Of course, filling Pence’s shoes will be no easy task.

Bochy also says the team has already discussed possible trade options. Of course, it may be too soon to find something on the trade market, and in the meantime, Bochy says the Giants may need to get creative. He mentioned the possibility of first baseman Brandon Belt spending time in the outfield, with catcher Buster Posey filling in at first base. “I can’t tell you what’s going to happen or who’s going to get the most playing time. If you look at our lineup as a group, we can get a little better,” Bochy said.

Whatever the Giants do, it’s going to be difficult to replace the production Pence has provided this season, and eight weeks is an awfully long time to be without their best hitter. The good news is that San Francisco currently holds a 5.5 game lead atop the NL West. But whether the Giants can hold onto that lead without Pence in the lineup for at least eight weeks remains to be seen.