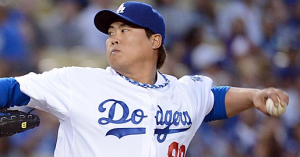 The Los Angeles Dodgers got some good news for their ailing starting rotation Thursday night with the long-awaited return of lefty Hyun-Jin Ryu. Unfortunately, Ryu was not exactly at the top of his game in his first major league start since September 2014.

In his big league return following shoulder surgery 21 months ago, Ryu allowed six runs on eight hits and got knocked out with two outs in the 5th inning, as the Dodgers lost to the San Diego Padres 6-0. He walked two and struck out four in his return after making eight minor league rehab appearances. The Dodgers were hoping to get a little more length from Ryu after the team tired out its bullpen in a 14-inning game the night before.

The performance may not have been what Ryu and the Dodgers were hoping for in his return, but both were pleased that the lefty came through it healthy. “Overall, the shoulder felt really great, no issues, I consider it pretty decent today,” Ryu said through a translator after the game. “As I threw more I was feeling better. I know it will get so much better as I pitch more innings. I was happy with my control. I just need to go through it more times and I will get better.”

Dodgers manager Dave Roberts echoed that sentiment. “I think the biggest part was getting him back out there and it was a victory in itself and the biggest question will be how he feels tomorrow and the next day,” Roberts said. “As far as results, we’d hoped for more and better, but to get him through five innings, there were some good things up until the fifth inning when I felt he ran out of gas a little bit. We’re encouraged.”

Roberts also spoke afterwards about the challenges of managing Ryu from start to start in his return. “This is the first time he’s gone through shoulder surgery, obviously it’s been a long road to come back, and we’re really mindful of it,” Roberts explained. “Until he can sustain start after start and increase the pitch count, it’s an unknown for him and for us.”

Of course, the Dodgers are doing the same with Brandon McCarthy, who pitched five scoreless innings on Sunday in his first major league start back from Tommy John surgery. McCarthy is expected to make his second start of the season on Saturday. Meanwhile, the Los Angeles rotation is just trying to tread water until Clayton Kershaw is able to return. Kershaw has been cleared to play catch after receiving an epidural injection to treat back pain, but there’s no exact timetable for his return to the mound.

Despite uneven results, the return of Ryu is important for the Dodgers, especially with Kershaw on the shelf. The recent return of Ryu and McCarthy and the addition Bud Norris has given the Dodgers improved depth in their starting rotation that will better enable them to survive the absence of their ace.

The Dodgers have lost three in a row, knocking them out of the top wildcard spot and pushing them 6.5 games out of first place in the NL West. But the team is undoubtedly encouraged by the return of a couple of their injured starting pitchers and are hopeful Ryu will continue to make strides in his subsequent starts.