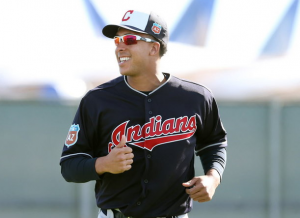 With Marlon Byrd being slapped with a year-long suspension for PED use last week and Abraham Almonte still serving an 80-game PED suspension, the Cleveland Indians outfield is starting to get a little thin. Unfortunately, it doesn’t look like Michael Brantley will be coming back any time soon to help out. According to reports that surfaced Monday, the Indians are concerned about Brantley’s recovery from a shoulder injury that sent him to the DL on May 10, with one report claiming that the injury will force Brantley to miss “a significant amount of time.”

Brantley has been limited to just 11 games this season after being an every day player in Cleveland since 2012 and one of the best outfielders in the American League over the past two seasons. The Indians did not have a timetable for his return when they placed him on the DL, and nearly a month later, they still don’t have a timetable for his return. Monday’s report that Brantley will miss “a significant amount of time” paints a bleak picture about his availability for the rest of the season.

Cleveland president Chris Antonetti has responded to those reports, saying, “Nothing really new. We are focused on working with Michael to help him get to the point where he’s not only healthy but strong enough to make a meaningful impact on the balance of our season. We don’t have a clear timetable for that yet but are encouraged by progress he continues to make.” Antonetti’s comments don’t exactly create optimism about Brantley being able to return to the team in the foreseeable future. Of course, Cleveland does not want to admit publicly if the situation with Brantley is as bleak as it sounds if they have plans to pursue an outfielder on the trade market later this summer.

Up to this point in the season, the Indians have done well to hold down the fort in the outfield without Brantley. In fact, their current five-game winning streak has Cleveland in first place in the AL Central. But with Byrd done for the year and Brantley unlikely to return any time soon, the Indians are starting to rely more and more on youngsters like Tyler Naquin and Lonnie Chisenhall. That appears to be a fine solution for the time being, but if it’s true that Brantley is set to miss a significant chunk of the season, the Indians may have to explore options outside the organization if they hope to stay on top in what is shaping up to be a competitive division.