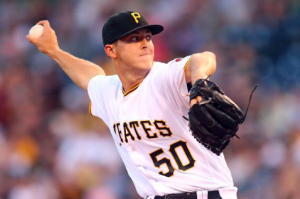 Pittsburgh Pirates starter Jameson Taillon underwent surgery on Monday to address an issue that doctors believe could be testicular cancer. The surgery came just a few days after Taillon was placed on the 10-day DL with a groin injury, which would now appear to be related to the issue that forced him to undergo surgery.

Taillon alerted team doctors about an issue over the weekend, leading to a consultation with Dr. John C. Lyne. Dr. Lyne performed the surgery on Taillon Monday morning in Pittsburgh while his teammates prepared to start a series in Los Angeles against the Dodgers Monday night. Further treatment and an official diagnosis will be determined based on the results of the surgery.

Monday evening, Taillon made a statement about his surgery merely being the latest in a series of challenges in his career.

“When I was a kid, I spent countless numbers of hours dreaming of being a Major League pitcher. Always determined (borderline obsessed) with working hard to make it, I never doubted myself. However, as a naive little guy, I never realized that each person has a different path and journey along their way to accomplishing their goals.

“Tommy John Surgery, Sports Hernia Surgery, a 105 mph lie drive off my hard head, and this most recent discovery are just a few of the stops along the way. They have all just added fuel to my burning fire, and inspired me to become even better.

“I vowed to use every setback as an opportunity for growth. Today I lost a piece of my ‘manhood.’ But, today I’m feeling like more of a man than I ever have. My journey hasn’t been the smoothest. But it is my journey, and I wouldn’t change it for anything. Thank you to my family, girlfriend, teammates, doctors, Pirates fans, and the entire Pirates organization for the support.”

Many of Taillon’s teammates have expressed their support for the young ace following the news.

“He’s tough as nails, so he’s always going to look for the positive in things,” said fellow starter Gerrit Cole. “Unfortunately it just couldn’t have happened to a harder worker, a guy who was prepared to do his job. This can be a really deadly disease, and it takes a strong person to beat it, and that’s definitely who he is.”

“(Taillon is) a strong guy, physically and mentally,” said infielder Josh Harrison. “He’s got nothing but support from us. We’re going to pray him up, love on him and just wait for his recovery. First thing is him being healthy. We’re not worried about a timetable for him being able to play. I’m more worried about him as a person, as a son and a friend.”

Before being forced to the DL, Taillon had been continuing to build on a promising rookie campaign on 2016. That rookie season came on the heels of missing the 2014 and 2015 seasons in their entirety because of Tommy John surgery and the subsequent hernia surgery that Taillon mentioned in his statement. In six starts this season, Taillon is 2-1 with a 3.31 ERA.

“It’s a choice each of us makes every day in how we handle what comes in front of us, and Jameson continues to choose to take a higher road, to take a positive road, to take an upbeat road,” said Pirates manager Clint Hurdle. “He’s very mindful of this being his journey. He decided long ago to own everything that happens. When you take ownership of every decision you make, of every act, circumstance that happens to you, and work through it in a positive fashion, there’s no telling what can happen.”

If Taillon is indeed diagnosed with testicular cancer, he would be the second major league pitcher to receive that diagnosis this year. Colorado Rockies starter Chad Bettis was diagnosed with testicular cancer over the winter. He had been given a clean bill of health but was then sidelined during spring training after his cancer reportedly spread to another part of the body, forcing him to receive chemotherapy treatment. Bettis remains out indefinitely.

It’s not confirmed yet, but it appears Taillon faces a similar battle as Bettis. At this point, there is no timetable for his return.

All of us at Sports Information Traders wish Jameson a speedy recovery.