Jay Bruce Would Waive No Trade Clause for A Contender 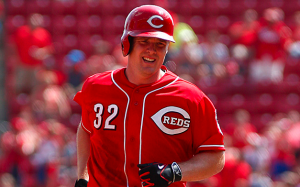 There’s officially one month until the MLB non-waiver trade deadline. One of the biggest names that could be on the move in the next month is Cincinnati Reds outfielder Jay Bruce. That is particularly true after reports surfaced Thursday indicating that Bruce would be willing to waive his no-trade clause if it means being traded to a team that’s in a position to contend for a championship.

Bruce has a $13 million option for 2017, but a $1 million buyout can make him a free agent after the season, making him an obvious candidate to be traded this summer, especially with the Reds still very much in re-building mode. The 29-year old Bruce, who’s having arguably the best offensive season of his career, says he would “consider waiving the no-trade clause for all types of reasons,” adding that there’s “no blanket reason I wouldn’t.” In the process, he couldn’t potentially give the Reds a rather substantial bounty in a trade.

There are seven teams that Bruce could block a trade to. Those teams are the Yankees, Red Sox, Athletics, Rays, Marlins, Twins, Indians and Diamondbacks. Of that group, only the Red Sox and Indians are obvious contenders, with the Yankees and Marlins being on the periphery of contention. Rumors have connected him to the White Sox, Royals, Dodgers, and Giants at various points this season.

Bruce continues to speak about his desire to play for a winning team, which is understandable after a number of losing seasons in Cincinnati. “If I am moved, which has seemed likely for the last year and a half, I’d like to go where the team is mostly likely to win,” he said. “Teams that want me are likely seeking somebody to help them win.”

The Indians have been mentioned specifically as a team that Bruce would waive his no-trade clause in order to join. On the surface, Cleveland would appear to be a perfect fit for Bruce. The Indians have lost Marlon Byrd for the season to a PED suspension and have been without Michael Brantley for most of the season due to a shoulder injury, and are uncertain about when he’ll be able to return. Bruce could slot into right field and immediately help a team that’s middle of the pack in the American League in most offensive categories.

Nothing appears to be imminent with Bruce, and there are bound to be several teams with an interest in acquiring him over the next month. However, with Bruce reportedly willing to waive his no-trade clause to go to a contender, there figures to be little chance that he won’t be traded this summer, securing his standing as one of the most desirable commodities on the trade market this summer.