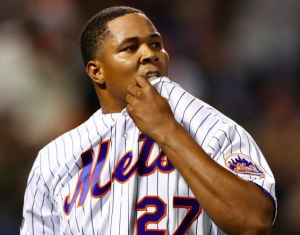 All season long, the New York Mets have watched members of their vaunted pitching staff go down with injuries, a trend that won’t stop. On Thursday, the Mets learned that closer Jeurys Familia has been diagnosed with an arterial clot in his right shoulder. On Friday, the club announced that Familia has undergone surgery to correct the blood clot and is likely to spend several months on the DL. An exact timeline isn’t known at this time, but it’s possible that Familia misses the rest of the season.

“I don’t have the results of the surgery, but we do believe that this is something that’s going to keep him out several months,” Mets GM Sandy Alderson said Friday. “It’s possible he’ll be back by the end of the year, it’s possible that he won’t. We just don’t know at this point.”

Familia began the season by serving a 15-game suspension for a domestic violence incident that occurred during the offseason. After some control issues in his first few appearances, Familia began to settle down and look like the dominant closer he’s been the past two seasons.

However, things changed on Wednesday when Familia informed the team about a tingling sensation he felt in his right ring finger. The team’s medical stuff allowed him to pitch on Wednesday, not believing the issue was serious. But Familia allowed four runs and recorded just one out while blowing a save against the Giants. Familia said after the game that he felt physically fine, only to be diagnosed with a clot the following day and placed on the DL Friday.

Familia now joins pitchers Noah Syndergaard, Steven Matz, and Seth Lugo on the DL. Syndergaard, New York’s ace entering the season, is also set to miss several months, although he’s expected back before the end of the season. Matz and Lugo have both been out all season and are just now starting to face hitters in extended spring training as they work their way back to full health.

In the bullpen, the Mets are back where they started when the season began, without Familia. Addison Reed figures to step as the team’s closer for the time being. Reed had some inconsistency early in the year, but he was 4 for 4 in save situations before Familia came back and hasn’t allowed a run since the calendar flipped to May, so the Mets should be in good shape with him as their closer.

In addition to Reed, the Mets have also received strong performances out of the bullpen from Jerry Blevins, Hansel Robles, and Josh Edgin, all of whom have an ERA under 2.00. However, New York’s bullpen has been overworked early in the season, and with Reed having to move from a setup role to the closer’s role, the Mets don’t have as much depth in their bullpen as they would like.

At some point, the Mets may look to trade for relief help, but it will be several weeks until teams are willing to trade away players. For the time being, the Mets will have to make due with what they have left in the absence of Familia. Even if Reed is able to fill in as the team’s closer, the fact that Familia may not return this season is a monumental blow to New York’s chances in 2017, as the Mets continue to be bombarded with injuries to impact players.