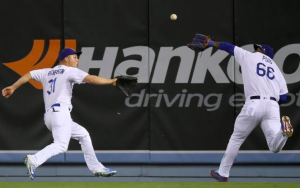 The Los Angeles Dodgers have had terrible luck with injuries the past two seasons, but they appear to have survived an ugly collision between outfielders Joc Pederson and Yasiel Puig Tuesday night without much harm. The two ran into each at full speed on the warning track at Dodger Stadium while chasing down a fly ball from a fly ball from Cardinals catcher Yadier Molina. Both players spent time on the ground following the collision, but both pronounced themselves fine afterward and are hoping to play on Wednesday.

The catch occurred in the 10th inning of a game the Dodgers eventually won in 13 innings. Pederson had the shorter route to the ball but it was actually Puig who ended up making the catch. However, in the process of making the catch, Puig appeared to elbow Pederson in the head, sending him flying into the outfield wall, where he lay motionless for a few moments. Puig, meanwhile, stood up to show that he had caught the ball before grabbing his chest and falling to the ground himself.

“He’s got cuts on his forehead, his arm, he took an elbow to jaw, hit his head against the wall,” Dodgers manager Dave Roberts said of Pederson’s injuries, comparing the collision to a car accident. “Right now there’s limited range of motion in his neck when he turns to the right. As a left-handed hitter, it’s going to get stiffer tomorrow, but right now I don’t see it as DL situation.”

Pederson was immediately lifted for a pinch-hitter in the bottom half of the inning, although Puig was able to stay in the game and played all 13 innings without further issue.

“We went all out for it. That’s just how baseball is,” Puig explained after the game. “I was the first to get there. When I got there I told him I had it and it was too late.”

Roberts was initially fearful that both players had suffered serious injuries, and based on the fortune the Dodgers have had with injuries recently, that’s not an irrational thought to have. But Los Angeles appears to have survived the ugly coming together without either player sustaining a long-term injury.

“It was one of those things, where both guys are selling out, not a clear-cut guy to make the play, kind of in no man’s land,” said Roberts. “Joc came up on (the) short end of it. Initially, I thought we lost both guys. Two everyday players, to lose to a collision like that, would (have) been very unfortunate. Could (have) been a lot worse.”

Puig said his ribs were bruised but he expects to be back in the starting lineup on Wednesday, which is great news after he missed a couple games over the weekend with a stiff back. As for Pederson, who passed the league’s concussion protocol after the game, the neck strain, which oddly enough happened on his bobblehead night at Dodger Stadium, is the biggest concern. He admits that he could end up missing a game or two, but doesn’t believe it’ll be a long-term issue.

“Luckily, nothing too bad,” Pederson after the game. “Hopefully it comes back better tomorrow and I keep working on it from there. It was just a tough ball in the middle of the gap. Part of playing the outfield, sometimes it happens.”

The Dodgers are already playing without Andrew Toles and Andre Ethier in their outfield, and so the loss of either Pederson or Puig, or possibly both, would have been a devastating blow to their lineup. Pederson’s neck is something to watch moving forward, but in a rare moment of good fortune on the injury front, the Dodgers survived the violent outfield collision without losing a player to a serious injury.