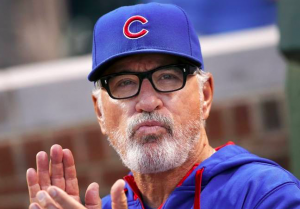 Heading into the 2017 season, most expected the Chicago Cubs to once again run away with the NL Central. The reigning World Series champions return largely the same team filled with blossoming young talent that dominated the division last year on its way to a world championship. But as they say, “That’s why they play the games.”

More than a month into the season, the Cubs sit at .500, losing five of their last six games for a record of 17-17. It’s not exactly where most thought the Cubs would be at this point, especially since on paper they still appear to be one of the most talented teams in baseball. Most will remember that the Cubs started last year by winning 25 of their first 31 games, and so now everyone has a theory for Chicago’s slow start. Cubs manager Joe Maddon believes is may simply be a matter of fatigue and a lack of execution.

“I sense sleep deprivation more than anything,” Maddon said prior to the team’s 3-0 loss to the Rockies Wednesday. “Sleep deprivation has a lot to do with it. Right from the beginning of the year, our schedule has been awkward. No one has had a chance to settle in.”

Maddon’s comments came 24 hours after Cubs catcher Miguel Montero, a 33-year old veteran on a young team, attempted to issue a wake-up call to some of his teammates after Chicago’s mediocre start to the season.

“The reality is, we can’t take anything for granted, and right now, I feel like we do,” Montero said Tuesday. “Honestly, we’re just not playing at our highest level. We have to shake it up, wake up. This will be a good wake-up call for us. We either come to play the right way or we’re going to have a short season.”

However, Maddon disagrees with his catcher that the team is somehow complacent after last year’s championship or taking things for granted. Instead, the skipper believes the problem is a lack of execution, particularly with regard to pitching and defense, and perhaps fatigue is playing a role in that.

“I don’t think anyone is taking anything for granted,” Maddon said. “I love the word expectations, I do, but on the flip side of that, it’s going to be a different path this year. It is. It just has to be. To this point, we haven’t pitched nearly as well, as starters. The biggest thing for me is defense. We haven’t caught the ball with the regularity that we normally do. Those were our bedrocks of our performance.”

Right now, Chicago’s rotation is middle of the pack in the National League, and while the bullpen has the lowest ERA in the N.L., the Cubs have already five blown saves this season, all coming from their contingent of middle relievers, not closer Wade Davis. Meanwhile, the Cubs finished Wednesday tied for the most errors in the National League.

Maddon believes the team’s success the past couple years was as much tied to pitching and defense as it was its potent lineup. Thus, the Cubs struggles in those areas has produced their disappointing record.

“That’s why we did as well as we did in ’15 and ’16,” Maddon explained. “The hitting got a lot of play last year, but it was the pitching that was so good. There became this run differential based on this otherworldly type of pitching. We may not pitch that good but we’re going to pitch better than we have to this point.”

The silver lining for Maddon and the Cubs is that no other team in the NL Central has established themselves as a dominant force in the division, and so a .500 record only puts the Cubs a couple games out of first place. However, the Reds and Brewers are both better than expected, while the Cardinals have shaken off a slow start and played great baseball over the last three weeks, meaning the NL Central is shaping up to be much more competitive than it was a year ago.

Nevertheless, Maddon is confident that the Cubs will eventually pitch and play defense the way they did last season and will ultimately be able to perform like the team everyone expected them to be this season.

“It’s not easy,” Maddon said. “We just have to get back to a little bit of routine, get our game back together completely and we’ll be fine. To be in the position that we’re in without playing even close to our best baseball, it’s kind of OK.”