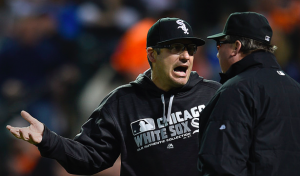 Major League Baseball is fed up with the actions of managers yelling at umpires over balls and strikes, and they’re telling the skippers that they need to calm down. MLB executive Joe Torre, himself a former big league manager, sent a memo out Friday when the second half of the season got underway telling managers to stop arguing balls and strikes and not use instant replay as a reason to get upset with the game’s umpires.

He says that because instant replay is now part of the game, teams have someone monitoring every pitch and every play, allowing them to immediately see every missed call or borderline strike that doesn’t go their way. The manager can then take that information and use it to yell at the umpire from the dugout.

Torre says that such behavior is “an express violation of the Replay Regulations, which state that ‘on-field personnel in the dugout may not discuss any issue with individuals in their video review room using the dugout phone other than whether to challenge a play subject to video replay review.'”

The manager turned executive wrote in the memo that it’s perfectly natural for there to be some disagreement between balls and strikes, but that managers are being ejected because of it far too often. By rule, managers are not allowed to argue balls and strikes with umpires or they face ejection from the game. “This conduct not only delays the game, but it also has the propensity to undermine the integrity of the umpires on the field,” Torre wrote.

Torre tried to put his foot down on the subject towards the end of the memo, writing that any coach or manager who is ejected for arguing with the umpires over balls and strikes “hereafter will be disciplined, including at least a fine.” Apparently, Oakland’s Bob Melvin and San Francisco’s Bruce Bochy did not receive the memo in a timely fashion, as both were ejected Friday night, the day the memo from Torre was circulated to managers throughout the league.

However, it doesn’t sound like baseball’s managers are going to be going along with Torre’s wishes voluntarily. “I’m still going to react to what I see in front of me,” Detroit manager Brad Ausmus said in response to Torre’s memo.

“Joe’s the boss, so I guess we’d better cool it,” St. Louis manager Mike Matheny added. “There’s just some days you can’t stand over there and not say something. They’re always making additions, and I get speeding the game up and sometimes that sort of thing slows it down, so it’ll take a little while to walk through that and see exactly how to play it. But you can’t take the emotion out of the game. Joe knows that as well as everybody, but I understand where he’s coming from.”

It sounds like if Torre is going to get through to baseball’s managers about arguing balls and strikes with umpires, he’s going to have to do it the hard way. After all, old habits die hard, and there are few habits in baseball older than arguing balls and strikes. Torre appears to be serious, and so no one should be surprised if fines and other punishments are afoot for the game’s managers.