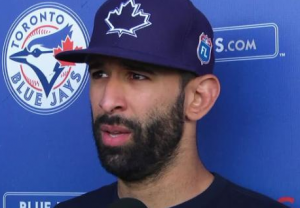 For the second time this summer, Toronto Blue Jays outfielder Jose Bautista has landed on the DL, an obvious setback for the AL East leading Blue Jays. Bautista returned form a toe injury less than three weeks ago, but he will be on the shelf for at least a couple more weeks after spraining his knee Tuesday night in a loss against the Tampa Bay Rays and landing back on Toronto’s DL prior to Wednesday’s win over the Rays.

Bautista suffered the injury when he took a stumble fielding a base hit in Tuesday’s game. “My cleat got caught in the turf, and the knee got a little jerk there, and then I landed on it, too,” he explains. Bautista stayed in the game, but felt pain in the knee Wednesday, prompting him to undergo an MRI that showed a Grade 1 sprain.

The six-time all-star is optimistic he’ll be able to return when his 15 days are up, but he still laments the freakish nature of the two injuries that have put him on the DL this year. “It’s really frustrating, especially after an offseason that a lot of hard work went into just getting my body ready and hopefully avoiding these types of situations,” Bautista said. “And then having it happen on two freak injuries or freak accidents, it’s pretty disappointing.”

Bautista will join Blue Jays center fielder Kevin Pillar, who went on the DL with a thumb injury earlier this month. Those two injuries in short order will certainly have an impact on the depth in Toronto’s outfielder. The recently acquired Melvin Upton Jr. is set to handle center field while Pillar is out, while right field figures to be a platoon between Darrell Ceciliani and Junior Lake, who was called up when Bautista went to the DL. At some point before Bautista and Pillar return, the Blue Jays hope to get Ezekiel Carrera off the DL, giving Toronto a player capable of playing all three outfield positions.

Toronto GM Ross Atkins says he likes the depth his team has in the outfield, but admits there’s no one player who can replace Bautista, who is hitting just .222 this season but has 15 home runs despite his toe injury earlier this season costing him close to six weeks of action. Shortstop Troy Tulowitzki took it upon himself to step up in Bautista’s absence Wednesday, driving in five runs in a win that gave the Blue Jays sole possession of first place in the AL East.

Of course, that one game may not be a representation of how the Blue Jays will fare with Bautista on the shelf. Toronto’s lead stop the AL East is slim, and while they will have the wild card as a contingency plan if they fall out of first place, a division title is obviously the goal. With multiple injuries in the outfield, that goal may be a little tougher for the Blue Jays to reach with the Baltimore Orioles and Boston Red Sox both breathing down their neck.