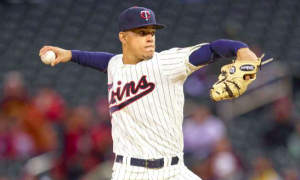 A year ago, Minnesota Twins starting pitcher Jose Berrios was in triple-A. He had made the first four starts of his big league career over the previous month but had struggled mightily. He began the season as one of the top pitching prospects in baseball, with future ace written all over him. But in 15 innings of work over those four starts he allowed 17 runs, good for an ERA of 10.20. When he returned to the Twins in August, he wasn’t much better, finishing his rookie season with an 8.02 ERA over 14 starts.

But a year later, everything is different for Berrios. The Twins waited until the middle of May to bring him up to the majors, giving him more seasoning in the minors, and that extra time seems to be paying off. In his first three starts in 2017, Berrios is 3-0 with a 1.66 ERA, having far more success during his sophomore campaign, as he appears to be fulfilling his potential as Minnesota’s ace of the future.

“It was difficult mentally for him. His confidence was shot,” Twins pitching coach Neil Allen said of Berrios at the end last season. “That was my biggest concern: are we going to be able to get his confidence back?”

But sending Berrios back to triple-A to start the season turned out to be the right move. In six starts, Berrios was 3-0 with a 1.16 ERA, which helped him put last season behind him and regain his confidence. But more than anything, the Twins wanted him to throw more strikes.

“He could get outs (in the minors) out of the zone,” explains Twins GM Thad Levine. “But he came to big leagues and was putting himself in a lot of hitter’s counts by pitching out of the zone. So the biggest challenge we gave him (was) to improve those quality strikes and his strike percentage, and he’s done that. It’s overly simplified, but he’s one of those pitchers who, if he throws strikes, he’s going to have success. When he’s in hitter’s counts, that’s when he got a little bit compromised last year.”

On a mission to throw more strikes, Berrios has used his fastball and hasn’t been afraid to throw it in the strike zone in an effort to get ahead of hitters. In three starts since being recalled earlier this month, that strategy seems to be working for Berrios, even against three of the most potent lineups in baseball in the Indians, Rockies, and Orioles.

“There’s some sneakiness to it, and it plays up a little bit,” Twins catcher Chris Gimenez said of Berrios’ fastball. “Even though it’s usually 92-93 [mph], I feel like it plays up a little higher like it’s 95-96. Whether it’s his delivery of the pitch or his release — he’s got some good pull-down at the very end with the snap off his wrist — the sneakiness for me is what’s working”

With better command of his fastball, not to mention impressive secondary pitches, Berrios has spent his last three starts dominated the same types of hitters who were knocking him around all of last season.

“He was electric,” Colorado slugger Ian Desmond said of Berrios after he tossed 7.2 scores innings against the first-place Rockies last week. “It looked a lot like Jose Fernandez, to be honest. Explosive, quick heater, and with that sweeping curveball that he can turn into a slider, too.”

The somewhat surprising emergence of Berrios over the last few weeks has given the Twins an unexpected boost to a rotation that was the worst in baseball last year. He’s also helped to push the Twins into first place in the AL Central. Minnesota doesn’t have much rotation depth, especially with Phil Hughes going to the DL with a shoulder injury earlier this week. As a result, Berrios is now an essential part of Minnesota’s rotation, except this time around, he’s pitching like a true ace.