Jose Reyes Returns to Mets, Others on Their Way 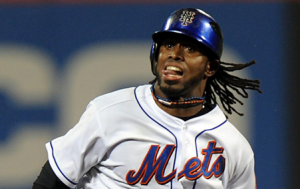 The New York Mets have been hurt by injuries more than almost any other team in baseball this year. Earlier this month, the team endured a period in which five players were sent to the DL within a span of a week. The good news is that players are starting to trickle back from the injured list, starting with Jose Reyes being activated from the DL on Saturday.

The Mets have gone through profound struggles of late, prompting manager Terry Collins to express his frustration publicly at his team’s performance and effort after being swept by the Arizona Diamondbacks last week. But the return of Reyes on Saturday has already provided a spark for the Mets. Reyes walked to leadoff Saturday’s game and then came around to score a 1st inning run, helping the Mets to snap their four-game losing streak.

“His energy is going to bring something here,” Collins said of Reyes before Saturday’s game. “I think one thing Jose is going to bring to us — and before he got hurt he was showing — is his leadership on the field and we need that energy. He’s trying to revitalize his career, and he’s in the right place for that.” Collins mention of leadership with regard to Reyes is significant, as leadership was a central focus of his rant last Thursday.

In addition to Reyes, the Mets are hoping to get outfielder Yoenis Cespedes and shortstop Asdrubal Cabrera back within the next week. After trying to nurse a quad injury for several weeks, the Mets finally put Cespedes on the DL on August 3 to allow him to fully heal. Collins said Saturday that Cespedes will play in rehab games starting on Monday with the hope that he will be able to return to the team Thursday or Friday. Meanwhile, Cabrera, who went down with a knee injury on the last day of July, will start playing in rehab games on Tuesday and aims to rejoin the Mets at some point next weekend.

“We’re looking here in the next seven days — with Jose back, Cespedes coming back shortly, Cabrera getting back shortly — those guys cannot get back at a better time,” Collins said Saturday. “We need them. We need their leadership, besides their playing ability.”

Once Reyes, Cespedes, and Cabrera return, the Mets lineup will be as healthy as it can be, as Lucas Duda and David Wright are not expected to return from injury this season. New York’s lineup could be even stronger than it was before the recent string of injuries, as the Mets lineup now includes Jay Bruce, who they acquired just before the trade deadline. In particular, the Mets would like to get Cespedes and Bruce together in the same lineup for an extended period of time, which could do wonders for what has been a stagnant offense, especially if Reyes can provide a spark from the leadoff spot.

The Mets struggles this season have made a second straight division title virtually impossible, as they trail the Washington Nationals by 10.5 games. However, despite weeks of sub-par play, the Mets are just 2.5 games out of the second wild card spot. If they can continue to get healthy over the next week and then stay healthy, the reigning National League champions may yet be a factor in the September playoff race and may find a way to sneak into the postseason this year.