Julio Urias Out For Season with Shoulder Injury 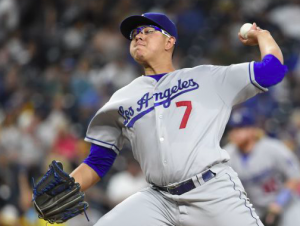 The Los Angeles Dodgers have lost one of their best young pitchers to a long-term injury. The club announced Friday night that 20-year old lefty Julio Urias will require left anterior capsule surgery. The surgery, which will be performed on Tuesday, means the end of the 2017 season for Urias. The recovery time for the surgery is expected to be 12 to 14 months. That means Urias is likely to miss a significant part of the 2018 season, if not the entire season.

Reports surfaced Friday morning of “heightened concern” regarding Urias’ shoulder. He hasn’t pitched since being placed on the triple-A DL on June 13.

Dodgers president of baseball operations Andrew Friedman told reporters Friday that the injury was “acute,” meaning it happened on one pitch and is not the result of repeated use. Friedman adds that Urias has no damage to his rotator cuff or labrum, which is obviously good news. Nevertheless, the anterior capsule surgery will likely keep him sidelined for at least a year.

Urias reached the big leagues as a teenager last season and soon showed why he’s one of the most promising young pitchers in the game. Across 15 starts and three relief appearance, Urias went 5-2 with a 3.39 ERA. The Dodgers were so impressed that they gave him a start in the NLCS.

However, his sophomore campaign has been unconventional, to say the least. The Dodgers held him back at the start of the season as a way to curb his innings. Urias shot through the minors so quickly that he didn’t build up his innings the way most pitchers do.

After being called up to the majors, he made three excellent starts in late April and early May. But two rough outings earned him a demotion to triple-A. Urias was solid back in triple-A before being sidelined by the shoulder trouble earlier this month. Despite optimism from the Dodgers that the surgery should be a simple procedure, anterior capsule surgery is what most would describe as a major operation for a pitcher.

Johan Santana is the most famous pitcher to have had the operation. He had the surgery in 2010 and missed the entire 2011 season as a result. Santana returned in 2012 and had some brilliant moments, including a no-hitter. But he suffered the same injury at the start of the 2013 season and hasn’t pitched in the majors since, despite several comeback attempts.

Of course, Santana was much older than Urias at the time of surgery. His age will likely help Urias during his recovery and allow the Dodgers to be more patient during his recovery. However, both Santana and Urias are undersized lefties, so there is some similarity between the two.

In the immediate future, the loss of Urias for the rest of the season takes away some of the rotation depth the Dodgers had. Had he been healthy, Urias likely would have returned to the majors at some point. The injury could force Los Angeles to look into acquiring a starting pitcher before the trade deadline. Of course, the Dodgers may have done that anyway.

In the long term, Urias now has an uncertain future. It’s quite possible that he’ll come back from the surgery and go on to have the career he looked destined to have before the injury. But there’s no guarantee that happens. Even if his recovery goes according to plan, there’s still a chance we won’t see Urias on a big league mound again until 2019, which must feel like a lifetime away for a 20-year old pitcher.