Justin Verlander Dodges Serious Injury But Questionable for Next Start 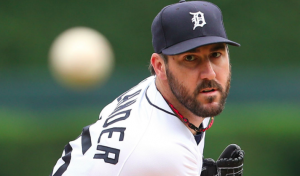 The Detroit Tigers received some good news on Monday. An MRI on ace Justin Verlander came back clean. The scan was done as a precaution one day after Verlander was forced out of his start against the White Sox due to discomfort in his right groin. However, Verlander and the Tigers aren’t out of the woods yet. The former Cy Young Award winner will continue to be evaluated in the days to come. There’s also no guarantee that Verlander will be able to make his next scheduled start.

Verlander struggled throughout a 39-pitch 1st inning, leaving the bases loaded after giving up one run. That inning got the attention of Detroit’s dugout and led to Verlander leaving two batters into the 3rd inning.

“He told (pitching coach Rich) Dubee after the first inning that he felt something in his groin,” Tigers manager Brad Ausmus shared with reporters after Sunday’s game. “We were keeping an eye on him.

Verlander ultimately threw 79 pitches in 2-plus innings, allowing two runs before being removed from the game because of the groin discomfort. Despite feeling discomfort over the first two innings, Verlander maintained his usually mid-90s velocity. However, his fastball velocity started to dip in the 3rd inning, which may have made the Tigers more eager to take him out as a precaution.

“I just felt like we had to protect him a little bit,” Ausmus said. “He didn’t want to come out. He said he felt like he could keep pitching, but I didn’t want him to be protecting his groin and then have something else be affected, like his shoulder or something like that. That was my call.”

The cautious approach appears to have paid off for the Tigers. Verlander’s follow-up MRI showed no structural damage, making it likely that he’ll avoid a trip to the DL. However, the Tigers are not yet sure if Verlander will be able to make his next scheduled start. An off day on Monday will allow the Tigers to push Verlander back one day. But Detroit will need a replacement if he’s not ready to go by Saturday.

Prior to this minor setback, Verlander wasn’t exactly having his best season. Through 12 starts this year, Detroit’s long-time ace is 4-4 with a 4.63 ERA. That’s a far cry from last season when Verlander won 16 games and posted a 3.04 ERA, with many believing that he was robbed of what would have been his second Cy Young Award.

Nevertheless, the Tigers need as many starts from Verlander as they can get. Outside of Michael Fulmer, most of Detroit’s rotation has underperformed this season. The group isn’t lacking in talent, but consistency has been a problem. The Tigers need Verlander to be healthy and perform up to his abilities to be the catalyst for getting the team’s rotation turned around.

Despite losing Verlander early in Sunday’s game, the Tigers have won four games in a row to get back to .500 and within 2.5 games of first place in the AL Central. However, there’s already been rumors of a potential fire sale this summer. This has put some pressure on the Tigers to keep winning and remain in contention for a playoff spot. For that to happen, the Tigers need a healthy Verlander, and so the team can breathe easy after his MRI came back clean, even if his next start is still up in the air.