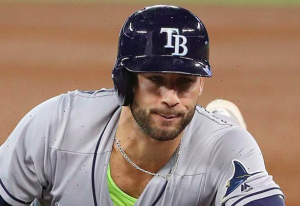 Tampa Bay Rays center fielder Kevin Kiermaier will miss the next two months with a hip injury. Rays manager Kevin Cash confirmed on Friday that Kiermaier has a hairline fracture in his right hip. He will not need to undergo surgery for the injury. However, it will take six to eight weeks for the fracture to heal, keeping Kiermaier out until at least August. The injury is a big blow to the Rays, who started Friday with a .500 record and very much alive for a playoff birth.

Kiermaier suffered the injury Thursday night while sliding feet first into first base. He had to slide to avoid a collision with White Sox first baseman Joe Abreu. However, he lost his balance while popping back up and immediately grabbed his right hip. Kiermaier was on crutches following the game and tests performed Friday confirmed the fracture.

“The thing about it is, when you’re running down to first base, I can’t run through the bag, or else I’m going to collide with Jose Abreu who’s a big dude,” Kiermaier said, describing the play on which the injury occurred. “I made the decision to try to slide right there.”

This will be the second straight season that Kiermaier misses significant time with an injury. He missed nearly two months last year after breaking his left hand making a diving catch. Since his breakout season with the Rays in 2014, Kiermaier has established himself as one of the elite defensive outfielders in the game.

He’s also started to become a consistent offensive contributor. After hitting .246 with an OPS of .741 last year, Kiermaier is hitting .258 with a .737 OPS in 2017. Before the injury, Kiermaier was on pace to set career highs in home runs, RBIs, and doubles. Most importantly, he has rewarded the Rays after signing a $53.5 million extension with the club during the offseason.

With Kiermaier going to the DL, the Rays have called up outfielder Mallex Smith from triple-A. Smith played 72 games for the Braves last season, hitting .238 with a .681 OPS. Over the winter, he was traded to the Mariners and then quickly traded to the Rays in the deal that sent Drew Smyly to Seattle. He has just 23 big league at-bats this season. But with Kiermaier out, the Rays are expected to give Smith a chance to be the team’s everyday center fielder.

“Mallex is going to play center for us,” Cash said Friday. “Everything we’ve heard from Triple-A — the Triple-A staff, (manager) Jared Sandberg — is that he’s a game-changer defensively. He’s played well both offensively and defensively there. So we’re going to go with him to start.”

If nothing else, Smith should be a suitable fill-in for Kiermaier defensively, as he’s known for his great speed. But whether he’s able to produce offensively in the majors remains to be seen. In 30 games at triple-A this year, Smith was hitting .311 with an OPS of .823.

If Smith doesn’t work out, the Rays will have other options in center field. Colby Rasmus, Peter Bourjos, and Steven Souza Jr. all have experience playing center field. Tampa Bay could also use DH Corey Dickerson to take a spot in the outfield if either Rasmus or Souza make the move to center field.

“We have options,” Cash said. “We still feel strongly about our outfield defense — but saying that we know we’re not going to replace Kevin Kiermaier.”

Cash is absolutely right when he says that Kiermaier will be tough to replace. He’s an impact player both offensively and defensively and one of Tampa’s core players. Even with several options for how to replace him, including a promising youngster in Smith, the loss of Kiermaier for two months is a huge setback for the Rays.