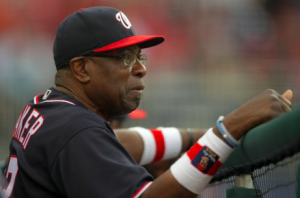 More than two months into the 2017 season, the manager of one of the best teams in baseball is still without a contract for next season. Washington Nationals skipper Dusty Baker says he has every intention of managing beyond this season. However, the club shows no signs of offering Baker an extension anytime soon, despite the fact that the Nationals appear poised to win their second straight NL East title under Baker.

“Why not? This is what I came here for,” Baker said of returning to the Nationals in 2018, and possibly beyond. “I didn’t come for two years. I came to win back-to-back titles.”

Baker signed a two-year deal with the Nationals prior to the 2016 season. He came to Washington hoping to add a World Series title to his already distinguished resume. That didn’t happen last year, but the Nationals have had little trouble dominating the NL East during Baker’s tenure. For most teams, that would be enough to lock up a manager long term, especially when that manager expresses his desire to stay, which Baker has done.

To be fair, Rizzo appears to be in Baker’s corner. The GM wanted to sign Baker to an extension during spring training. He “strongly recommended” to team ownership that they lock up Baker beyond the 2017 season, but nothing came about. Now there appears to be no urgency in signing Baker to an extension as we approach the midway point of the season.

“Our priority is to focus on the team this season, and to win these games,” says Rizzo. “But we’re not going to mistake that for not making him a priority.”

Historically, Nationals management has not been keen on giving managers extensions, preferring to keep them on short-term deals, sometimes one year at a time. The Lerner family doesn’t appear ready to make an exception in Baker’s case, despite his success during his year and a half in Washington.

“We do not discuss management contracts,” Nationals ownership said in a statement. “That said — Dusty Baker is a real asset to our ball club. His work ethic and experience have earned him the respect of the clubhouse. We are fortunate to have him in our dugout.”

Of course, that policy hasn’t always worked out. Former manager Jim Riggleman became so frustrated as a lame-duck manager that he resigned in the middle of the 2013 season. The Nationals also lost out on hiring Bud Black as their manager by not offering him more compensation. The club ultimately hired Baker to fill the opening.

Fortunately, Baker knows what he signed up for, even though he believes he’s worth more than what his contract his paying him.

Nevertheless, there appears to be no indication that the Nationals will offer Baker a contract extension before the end of the season. Baker has the support of both Rizzo and his players. He also seems to be enjoying his time in Washington. So why Nationals ownership hasn’t offered him an extension remains a mystery.