Posted on August 1, 2016 by Bryan Zarpentine 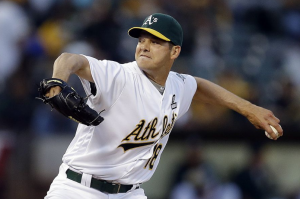 The Los Angeles Dodgers have made a big splash just a few hours before the non-waiver trade deadline. On Monday, the Dodgers acquired pitcher Rich Hill and outfielder Josh Reddick from the Oakland Athletics in exchange for three pitching prospects: Grant Holmes, Frankie Montas, and Jharel Cotton. The A’s have made an effort to sign both Hill and Reddick to long-term contracts, but in the end chose to trade them. Both Hill and Reddick will be free agents after the season, making them rental pieces for the Dodgers.

At the moment, Hill is on the DL while he deals with a blister on the middle finger of his left hand. He has not pitched since July 17 when he was removed after five pitches because of the blister. However, he appears to be healing and could be ready to return from the DL this weekend. Los Angeles, of course, is no stranger to injured starting pitchers, as they are currently missing ace Clayton Kershaw, as well as Hyun-Jin Ryu, Brett Anderson, and Alex Wood. Meanwhile, Bud Norris left his start Sunday with a lat injury, putting his status up in the air.

Assuming Hill is able to return from his blister, he’s a pitcher capable of leading the Los Angeles rotation down the stretch and into the postseason, even if Kershaw is unable to come back, which looks like a possibility, as the team is unsure when he’ll return to the amount. In 14 starts, Hill is 9-3 with a 2.25 ERA.

As for Reddick, he missed several weeks earlier this season with a broken thumb, but has come back healthy. On the season, Reddick is hitting .296 with eight home runs and 11 doubles, and during the month of July he hit .273 with five home runs and three doubles, proving his return to full health after the injury. Reddick figures to supplant Yasiel Puig in right field for the Dodgers, who have been perpetually disappointed with the performance of the 25-year old Cuban this season. The Dodgers could also move Reddick to left field, where infielder Howie Kendrick has gotten a majority of the playing time this season. The acquisition of Reddick also opens the door for the Dodgers to trade Puig to another team if they can find a club interested in taking him.

After being unable to sign Hill or Reddick to long-term deals, the Athletics will receive three quality pitching prospects. Holmes was a first round pick in 2014 who has spent all season in advanced-A ball. He is a hard thrower and could grow into a mid-rotation starter if he learns how to pitch. Montas came to the Dodgers last winter from the Chicago White Sox, with whom he made his MLB debut last September. However, he’s missed most of 2016 after having a rib removed over the winter and is currently on the DL. He throws in the mid to upper 90s and may profile best as a reliever. Cotton is an undersized righty who many believe will end up in the bullpen. He’s spent all season in triple-A, posting a 4.90 ERA in the Pacific Coast League.

While the Athletics added three promising pitchers to their farm system, the Dodgers have acquired two players who have a chance make an impact during the stretch run. Assuming he returns from the DL, Hill has the ability to fill the shoes of Kershaw, at least as well as any one pitcher could hope to do, while Reddick gives the Dodgers a left-handed power bat in the middle of their lineup. Los Angeles currently trails the San Francisco Giants by two games in the NL West and holds a two-game lead for the top wild card spot, and the additions of Hill and Reddick make the Dodgers that much more likely to secure a playoff spot in 2016.