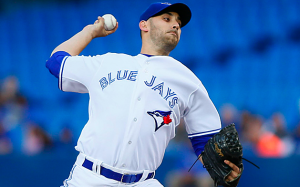 One day after Marco Estrada learned he had made the All-Star Team for the first time in his career, the Toronto Blue Jays placed him on the 15-day DL with a sore back. The injury will prevent Estrada from pitching in next week’s All-Star Game and will cause him to miss Thursday’s scheduled start against the Detroit Tigers.

Estrada’s back has been an issue since the middle of June. Despite receiving multiple cortisone shots, the pain in his lower back has lingered. Estrada last pitched Saturday against the Cleveland Indians, but was forced to leave the game after five innings because of pain in his back. Toronto considered pushing back his next start to Thursday or Friday, which could have allowed Estrada to then pitch Tuesday in the All-Star Game, but decided it was best give Estrada more time to rest and heal his aching back.

“It’s something that I didn’t want to hear,” Estrada said Wednesday after the decision to go on the DL was made. “I thought I was going to be able to find my way through it, but I think we’re doing the right thing.” Estrada called missing the All-Star Game “my worst nightmare” but acknowledge it’s the best decision in the long run. “We still have a lot of games to play, and I need to be healthy for this team,” he said.

Estrada making the All-Star Team for the first time at age 33 is one of the best feel-good stories surrounding this year’s Mid-Summer Classic. Estrada intends to travel to San Diego to enjoy the all-star festivities even though he won’t be playing in the game. “I’m still going to be a part of the team. I’ll be there supporting the guys and I’ll just enjoy every minute of it,” he said Wednesday.

Toronto manager John Gibbons has already spoken to Kansas City Royals and American League manager Ned Yost about Blue Jays pitcher Aaron Sanchez taking Estrada’s place on the All-Star roster. “He’s definitely an All-Star-caliber-type pitcher,” Yost said prior to Wednesday’s series finale between the Blue Jays and Royals. “There’s three or four other guys, too. We’ll get together as a staff and make a determination.”

Without Estrada pitching on Thursday, the Blue Jays will turn to Drew Hutchison, as Toronto begins a four-game series with the Detroit Tigers following their sweep of the Royals. Hutchison threw out of the bullpen on Saturday and made one start for the Blue Jays in April, but other than that has pitched exclusively in the minors this season after making 28 starts for Toronto last year.

As of now, the plan is for Estrada to return July 22 when the Blue Jays begin a series with the Seattle Mariners. Estrada will throw a bullpen session between now and then, although he typically doesn’t between starts. “I’ll throw in between just because it’s such a long break,” Estrada explains. “That will kind of tell me more about how my back is feeling. But I figure once the All-Star break is over, I’ll be back to 100 percent, or at least close to it.”

The Blue Jays are currently on a five-game winning streak, which has taken them into second place in the AL East, 2.5 games behind the Baltimore Orioles. It has also given Toronto ownership of the first wild card spot. Missing Estrada for a couple starts may hurt in the short term and risk the Blue Jays losing some of the momentum they’ve built recently, but a healthy Estrada in the second half can play a big role in getting Toronto back to the postseason.