Matt Harvey Apologizes To Mets After Returning From Suspension 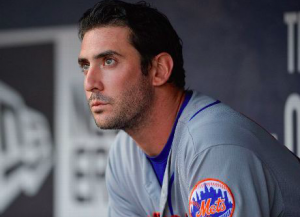 New York Mets starting pitcher Matt Harvey walked into the home clubhouse at Citi Field Tuesday afternoon ready to face the music. Harvey returned to the Mets on Tuesday after serving a three-game suspension levied by the organization for a violation of team rules. The suspension went into effect on Saturday despite not being announced to the public until Sunday morning.

Over the last 48 hours, details have slowly emerged about why Harvey was suspended for three games. Reports indicate that Harvey was out late with friends at a bar Saturday night and also played golf Sunday morning. On Sunday, he informed Mets he was suffering from a migraine and would not make it to the ballpark on Saturday. However, it turns out Harvey wasn’t excused and when he arrived at Citi Field Sunday morning ready to make his scheduled start, he was informed that he’d been suspended.

A contrite Harvey addressed those reports and his suspension for the first time on Tuesday.

“Yes, I was out on Friday night, past curfew. I did play golf Saturday morning and I put myself in a bad place to be ready to show up for a ballgame that was my responsibility. I take full blame for that, and I’ve apologized to my teammates. I’ve apologized to the coaches and I’m doing everything in my power so that never happens again.

“Like I said, I’m extremely embarrassed for my actions. I’m looking forward to getting things back on track and doing everything I can to help this team win and help this organization moving forward. They all have my word on that.”

The three-game suspension appeared to widen a growing gap between the Mets and Harvey. Some close to the organization have suggested that the suspension was the final straw in a series of somewhat minor transgressions from Harvey over an extended period of time. Based on his initial return, the suspension could end up having a positive effect, as Harvey appears ready to earn back trust from Mets fans and the organization.

“People make mistakes, and there are things I have realized the last couple days,” Harvey said Tuesday, indicating that one thing he learned involves “putting myself in a better place to perform physically.”

Of course, it may take more than a statement, no matter how sincere, for Harvey to get back into the good graces of his teammates, coaches, and fans.

“I know one thing about our society: You make a mistake, you stand up, be accountable and move on,” Mets manager Terry Collins said Monday. “He needs to address the guys. We’ve got to get this behind us. However he wants to go about doing that, I’ll sign on for it. We have a good clubhouse. Understand, you’re never going to have 25 that all like each other. But they respect each other and that’s all I want.”

The Mets announced Monday that while Harvey is returning to the team on Tuesday, he won’t be returning to the mound until Friday. He will not pitch in front of the home fans on Tuesday or Wednesday; instead, he will start Friday when the Mets begin a road trip in Milwaukee against the Brewers. If the Mets stick with a five-man rotation after Harvey’s start Friday, it could be two weeks until Harvey makes a start at Citi Field.

In addition to finding redemption after what has been an embarrassing suspension, Harvey also has to get things turned around on the field. In six starts this season, Harvey is 2-2 with a 5.14 ERA. With Noah Syndergaard, Steven Matz, and Seth Lugo all on the DL for the foreseeable future, the Mets are short-handed in their rotation and need Harvey to be much better than the pitcher who’s allowed 12 runs in 9.2 innings over his last two starts.

Both on and off the field, Harvey faces a steep uphill climb in the days and weeks to come. But Tuesday’s apology appears to be a small step in the right direction. Both he and the Mets hope that it will end up being a turning point for his season; otherwise, things could get even worse before they get better.