Matt Moore Falls One Out Shy of No-Hitter 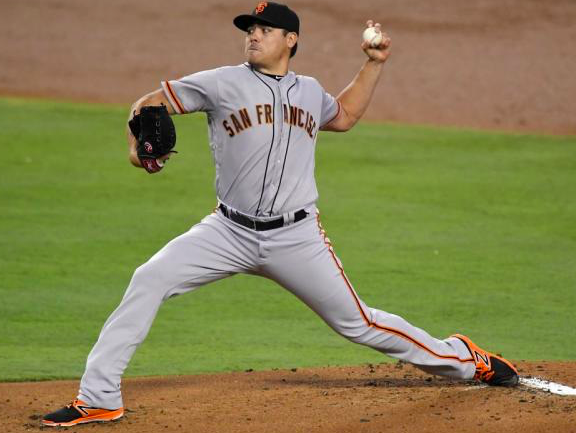 One more out was all San Francisco Giants pitcher Matt Moore needed to record the first no-hitter of his big league career Thursday night in Los Angeles. It would have been the perfect way for Moore to come full circle after missing all of 2014 and half of the 2015 season because of Tommy John surgery. Alas, it was not meant to be, as Rookie of the Year favorite Corey Seager lofted a fly ball into right field that fell just a few feet in front of Gorkys Hernandez. It was, nevertheless, a brilliant pitching performance for a team that needed it.

After Seager’s hit dropped, all Moore could do was smile. “It was just fun,” he said afterwards. “That’s one of the things that everybody says to each other on the way out to the field — ‘Have fun.’ At times, it’s hard to actually enjoy yourself. So today, it was about as close as it comes to being able to have fun with it.”

Upon surrendering the hit to Seager, Moore was immediately removed from the game after a 133-pitch effort. But he was not at all displeased with how his evening ended. “Giving up a base hit right there is a part of the game,” Moore said. “It was a fun ride all the way up until that point. There’s not a lot to be angry about. I think the smile just kind of came out.”

Of course, as Moore went through inning after innings without allowing the Dodgers to get a hit, San Francisco manager Bruce Bochy was pacing back and forth in the team’s dugout, worrying about the high pitch count Moore was racking up in search of a ho-hitter. “He was excited to have a chance at it. He was very grateful and said, `thanks, I appreciate you giving me a chance,'” Bochy said. “He didn’t show any signs of frustration or disappointing end to give up a hit there. He pitched his heart out.”

Bochy also praised Moore for delivering such a stellar effort in what he called “the biggest game all year.” Heading into Thursday’s game, the Giants were in danger of getting swept by the Dodgers, a team that has already usurped their lead atop the NL West. San Francisco has the worst record in baseball since the all-star break, and a loss Thursday would have left them four games back of the Dodgers in the division and with the slimmest of leads for the top wild card spot.

As it stands now, the Giants are just two behind the Dodgers and hold a game and a half lead for the top wild card spot and have a three-game cushion in terms of being out of a playoff spot altogether. San Francisco now gets a series at home against the Atlanta Braves, the worst team in baseball, a series that could get them get things turned around. Meanwhile, the Dodgers begin a series Friday with the Chicago Cubs, would could open the door for the Giants to gain ground on Los Angeles.

As for Moore, one has to wonder if the high pitch count he racked up Thursday night could affect him moving forward, which would undoubtedly hurt San Francisco’s playoff chances. However, afterwards Moore said that he’s far enough removed from Tommy John surgery, which was more than two and a half year ago, that he isn’t concerned.

Pitchers have had issues before after enduring high pitch counts while chasing a no-hitter. Earlier this week, the New York Mets placed Steven Matz on the DL after he entered the 8th inning with a no-hitter in his most recent start. Will something similar happen to Moore? We’ll just have to wait and see.