Mets Matt Harvey Lands on the DL with Shoulder Injury 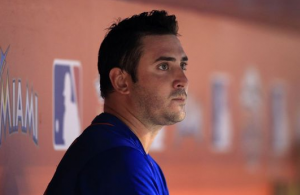 In the midst of an up and down season that has definitely seen more downs than ups, New York Mets pitcher Matt Harvey has been placed on the 15-day DL with a shoulder injury. The Mets made the announcement Wednesday night, two days after Harvey’s last start, during which he got knocked out in the 4th inning by the Miami Marlins after allowing six runs (five earned) on 11 hits.

The Mets have officially listed the reason for Harvey’s DL stint as shoulder discomfort. He was examined by team doctors who have recommended he see Dr. Robert Thompson, a St. Louis-based doctor who specializes in thoracic outlet syndrome and other conditions related to blood flow. Harvey is scheduled to see Dr. Thompson on Thursday. In 2012, Dr. Thompson performed surgery on former Met Dillon Gee to repair a damaged artery in Gee’s shoulder that resulted in a blockage. It’s not known if Harvey has a similar condition.

Until Harvey is examined by Dr. Thompson, the Mets won’t have a full prognosis on Harvey, but being dispatched to St. Louis to see a specialist is not a good sign. Despite a rough season, Harvey did show signs of being able to turn things around in late May and the early part of June when he had three consecutive quality starts, during which he allowed just two runs over 20 innings. However, this is yet another setback for Harvey in a season that has not gone how anyone expected.

Harvey’s trip to the DL is the just the latest medical issue to hit a starting rotation that many believed was the best in baseball coming into the season. The Mets recently revealed that both Noah Syndergaard and Steven Matz are pitching with bone spurs in their throwing elbow, although both plan on continuing to pitch and both performed well in their most recent outing.

The Mets are likely to use swing man Logan Verrett to make Harvey’s next scheduled start, which is Saturday against the Washington Nationals. Seth Lugo has been recalled to take Harvey’s spot on the roster and will likely pitch out of the bullpen. The Mets may reassess their rotation options once they know more about how long Harvey may be out.

The Mets were originally hoping that Zack Wheeler would be back from Tommy John surgery by the all-star break, which would have allowed him to step into Harvey’s spot in the rotation. However, he had a setback last month and is yet to start throwing in minor league games. Wheeler should start to make minor league rehab starts soon, but he’s won’t be ready to rejoin the Mets until early-to-mid August at the earliest.

In the meantime, all the Mets can do is hope for the best with Harvey. Considering his erratic performance this season, the Mets should be able to survive his absence as long as they don’t lose any other pitchers to injury, most notably Syndergaard and Matz, who are both dealing with bone spurs. If those two can stay on the field and pitch effectively, the Mets should be in good shape with the way Bartolo Colon has pitched all year and Jacob deGrom starting to look like the deGrom of old. Of course, even if he does return from the DL at some point, Harvey remains a huge question mark for the Mets moving forward.