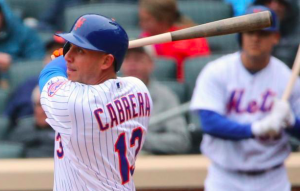 The New York Mets already have so many key players on the DL, what’s one more? On Tuesday, the Mets added shortstop Asdrubal Cabrera to the 10-day DL with a sprained left thumb. Cabrera joins David Wright, Yoenis Cespedes, and Travis d’Arnaud on the DL. The Mets are also without three starting pitchers, including ace Noah Syndergaard, and closer Jeurys Familia. The club has lost five straight games amidst its abundance of injuries.

Cabrera initially hurt his thumb over a week ago but appeared determined to avoid a stint on the DL. He was able to serve as a pinch hitter before returning to the starting lineup last week Friday and Saturday. However, Cabrera was unable to play on Sunday and Monday amidst conflicting reports on the severity of the thumb injury.

“It’s in the knuckle part of it. He’s got a strain in there,” Mets manager Terry Collins said Monday. “Anytime he rolls over or something it swells up and he’s missing a couple days. There’s certainly some thought of, we’ve got to calm it down.”

On Tuesday, the Mets finally decided that the thumb injury warrants a trip to the DL. Cabrera has also been hampered by soreness in his legs this season, so a trip to the DL may give him a chance to recover from multiple ailments.

There was speculation that if Cabrera went to the DL the Mets would call up shortstop Amed Rosario, who’s considered one of the top prospects in all of baseball. However, the Mets have decided to keep Rosario in triple-A, despite the 21-year old hitting .361 with an OPS of .911 this season.

With Cabrera out, Jose Reyes figures to be the everyday shortstop for the Mets. Reyes began the season as the team’s primary third baseman in place of Wright but has recently relinquished that position to the red-hot T.J. Rivera. But Reyes and his .186 batting average will get another chance to play every day in Cabrera’s absence. Wilmer Flores and Matt Reynolds could also see time at shortstop, but for now, Rosario is not being considered an option.

In fact, the Mets are choosing not to bring up a position player to replace Cabrera on the roster. Instead, they’ve signed reliever Neil Ramirez to help reinforce a bullpen that has been overworked to this point in the season and is starting to show signs of it during the team’s current five-game skid.

Of course, Ramirez may be little more than a band-aid for a bleeding bullpen that has a 13.50 ERA over its past 15 innings. Ramirez has already been designated for assignment by two different teams this season. In nine appearances with the Giants, he posted an ERA of 8.71 with opposing hitters batting .319 against him. After the Giants let him go, he was scooped up by the Blue Jays but released again before pitching for Toronto. Ramirez spent time with three different organizations in 2016, so he’s been well traveled over the past year.

Nevertheless, Ramirez is a former 1st round pick who had a strong rookie season with the Cubs in 2014. Also, despite his high ERA, he has 18 strikeouts in 10.1 innings this season, so he offers some upside, which has the Mets hoping they’ll catch lightning in a bottle with hm.

At this point, New York’s current losing streak and abundance of injuries have the team grasping at straws, looking for an answer. Very few players on the roster have managed to perform as expected or managed to stay healthy this season, putting a team with high hopes at the start of the season five games under .500 in the middle of May. One has to wonder if the Mets have enough horses to persevere through so many injuries and disappointments. If the team doesn’t show signs of life soon, it could be too late to do anything.