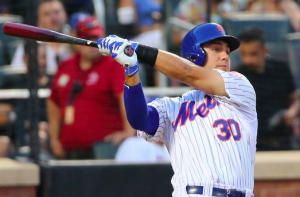 A little more than three weeks after the New York Mets demoted him to triple-A, outfielder Michael Conforto is on his way back to the big leagues. The Mets announced Sunday night that Conforto was being recalled and Brandon Nimmo optioned back to triple-A. In 16 games at triple-A, Conforto hit .344 with three home runs, two triples, and four doubles, giving him an OPS of 1.043 over that short period.

Conforto burst onto the scene last summer, giving the Mets offense a boost and becoming a key part of the team winning the NL East and ultimately the National League pennant. He picked up where he left off at the start of the season, hitting .365 with four home runs and 11 doubles in the month of April, making it look like he was on his way to being an all-star in his sophomore campaign.

However, in May, Conforto hit a funk and simply could not break out of it. He hit just .169 during the month of May and then hit .119 in 20 games in June before being demoted. After a few weeks in triple-A, Conforto appears to have broken out of his slump and regained his confidence. The Mets are calling him up at a similar time that they called him up last season, and they are hoping for similar results.

Nimmo appeared to take the demotion well after hitting .235 with one home run over 51 at bats during his first stint in the big leagues. “I know I have a lot to work on, and I can still do that in Triple-A,” he said after learning of the demotion. “I think right now they feel like Conforto can really help out the team. I think that he can, too. I hope that he’s healthy and good to go and can help this team and spur them on to a nice winning streak.”

Conforto’s return to the Mets comes with one caveat, and that’s Yoenis Cespedes. Cespedes returned to the lineup Sunday for the first time in more than a week after dealing with a strained quad muscle. He says playing primarily in center field this season has put extra stress on his quads and that he would prefer to play left field the remainder of the season.

Of course, right field has been manned by Curtis Granderson all season, with Granderson second on the team in home runs with 16. Juan Lagares would undoubtedly provide Gold Glove caliber defense in center field, but the Mets would have to make a daily choice between Conforto and Granderson. The Mets could move Granderson to center field, but it’s uncertain whether he can handle the position defensively at this point in his career.

In the mean time, Nimmo will return to triple-A and play primarily center field, potentially setting him up to return to the majors and form a partnership with Lagares there later in the season. However, the bigger issue is fitting Cespedes, Conforto, and Granderson into two corner outfield spots. How the Mets will handle that situation and get the freshly recalled Conforto in the lineup remains to be seen.