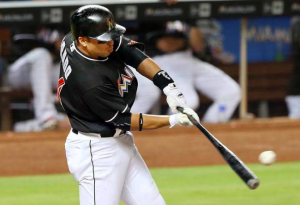 As the Miami Marlins struggle to stay relevant early in the 2017 season, they will have to do so with a shorthanded infield. Both Martin Prado and Miguel Rojas suffered injuries in the team’s win Sunday over the Mets. On Monday, Prado was added to the 10-day DL with a hamstring injury he suffered running the bases Sunday. Prado was only in the game as a replacement for Rojas, who left Sunday’s game with a thumb injury and is considered day-to-day.

Losing Prado, the team’s every-day third baseman, is a significant blow to Miami’s cause. Prado began the season on the DL after injuring the same hamstring while playing for Team Venezuela during the World Baseball Classic. Since coming off the DL on April 17, Prado is hitting .290 with a .721 OPS, returning to the no. 2 spot in Miami’s lineup where he plays an important role in the team’s lineup.

Prado pulled up lame while running the bases Sunday and was immediately removed from the game in clear discomfort, and so the fact that he was placed on the DL Monday is not a surprise. A second injury to the same hamstring he strained in March could mean an even longer recovery time this time around, although the team has not yet given a timeline for Prado’s recovery.

“Just frustration. I don’t think there is another word,” Prado said after Sunday’s game. “Your preparation, and everything you do, and then you get hurt again. Things are not going the right way.”

Meanwhile, the injury to Rojas adds another element to the loss of Prado, as the Marlins could look to him to help fill in for Prado while he’s out. Rojas is off to a phenomenal start to the season offensively, hitting .338 with a .789 OPS, an impressive number for a player who provides little power. His performance has been so impressive recently that he’s pushing Adeiny Hechavarria for playing time at shortstop.

Rojas aggravated jammed his thumb last week and then re-aggravated the injury on Sunday, forcing him out of the game. The Marlins have decided to not to put him on the DL at this point, although after Sunday’s game, Rojas wasn’t exactly confident in his ability to play and contribute to the team right now.

“At that moment, I felt like if I keep playing, I might throw the ball away and put the team at risk to lose the game,” Rojas said Sunday.

With Prado on the DL and Rojas unavailable for the time being, Derek Dietrich will step in as Miami’s primary third baseman. Dietrich has gotten off to a sluggish start offensively this season, hitting just .224 in his first 58 at-bats. However, he’s a capable hitter who may start to produce if he begins to play every day.

The Marlins have also recalled infielder J.T. Riddle to replace Prado on the active roster and help make up for the temporary absence of Rojas as well. Riddle was just 2 for 14 when he was with the Marlins earlier this year, but he’s a strong defensive player who could play shortstop, second base, or third base if needed.

Of course, even if Rojas is able to return in short order, the loss of Prado could have a significant effect on the Marlins. When healthy, Prado is a key player at the top of Miami’s batting order, and losing him for what could be an extended period of time is a significant hit for a club that’s under .500 and trying to remain competitive without falling too far out of contention.