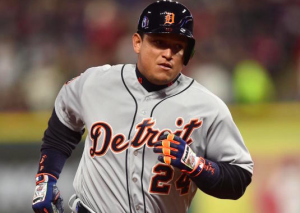 Miguel Cabrera hit a walk-off home run Thursday night to lead the Detroit Tigers over the Tampa Bay Rays. It was his first home run in nearly a month and a rare bright spot in what has been arguably the most trying season in his career. But it turns out there’s a reason why the 34-year old has struggled this season. After his walk-off home run, Cabrera opened up to the media about a series of nagging injuries that may have played a role in his disappointing season.

“My back, my hip flexor, my groin,” Cabrera told reporters, mentioning all body parts causing him trouble this season. “I don’t want to say, I don’t hit, so I got something. I don’t want an excuse.”

Cabrera had one stint on the DL earlier this year. It was officially due to a groin strain, although the 10 days off allowed him to rest all that was ailing him. He says that the problems first surfaced while playing for Team Venezuela during the World Baseball Classic and have not subsided.

“Since the World Baseball Classic when I hurt my back, I can’t get it out of the way,” explains Cabrera. “It’s something that I deal with every day. I’m not going to stop playing or make an excuse. I try to do my best.”

Of course, Cabrera doesn’t struggle the way other players struggles. His version of a down season is hitting .280 with an OPS of .823. But if the season ended today, those numbers would be the lowest they’ve been since his rookie season with the Marlins in 2003. He’s certainly not giving the Tigers the kind of performance they’ve come to expect from him.

“I don’t want to say I’m not hitting because I’ve got (an injury),” Cabrera said. “I don’t want to make excuses. You’ve got to stop being sorry for yourself. You’ve still got to go out there and play, play hard.”

Coinciding with Cabrera’s struggles this season is a sluggish performance from the Tigers in general. The Tigers are three games under .500 and tied for third in the AL Central. If the team is not firmly in contention a month from now, the Tigers front office may look to trade off some key pieces at the trade deadline.

On paper, the Tigers would appear to have more than enough talent to be a playoff contender. They are also far from out of contention, just four games out of first place in the AL Central. Cabrera’s walk-off home run on Thursday could be a turning point. Cabrera personally has started to heat up over the past week, which could be a sign that he’s ready to lead the Tigers back to the top of the division.

If nothing else, Cabrera says he has no intention of sitting out, even if he’s playing at less than 100%. That should create some optimism in Detroit that the Tigers can remain in postseason contention. But there is undoubtedly pressure on Cabrera and the Tigers to get on track and stay on track in the weeks to come, as the possibility of a summer fire sale still looms.