Mike Trout To DL with Torn Thumb Ligament, Out 6-8 Weeks 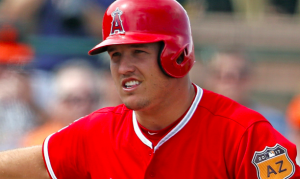 Los Angeles Angels center fielder Mike Trout has been placed on the DL for the first time in his career. Trout was forced to leave Sunday’s game against the Marlins after injuring his thumb while stealing 2nd base. The Angels were hopeful that the injury wasn’t serious after X-rays came back negative. However, an MRI performed Monday revealed a torn ligament in Trout’s left thumb. Trout has since decided to undergo surgery, which will keep him out an estimated six to eight weeks.

Angels shortstop Andrelton Simmons suffered a similar injury last year, and after undergoing surgery, he ended up only missing about five weeks, leaving some hope that Trout could return closer to six weeks than eight weeks. Simmons also had a productive second half of the season after returning, so there was no drop-off in his performance after returning from the injury.

Losing Trout for up to two months is obviously a massive blow to the Angels, who are already 11 games behind the Houston Astros in the AL West. Los Angeles is still very much in the hunt for a wild card, but only because Trout having another outstanding season. Trout, who has won American League MVP in two of the last three seasons, is hitting .337 with 16 home runs. He trails only Freddie Freeman, who’s also on the DL, for the major league lead in OPS.

“It’s tough, especially being a guy that’s at the top of his game right now,” said Angels right fielder Kole Calhoun. “What he’s doing this season is unbelievable. To be sidelined in the middle of that, it’s tough mentally. Nobody wants that. But Mike’s good at everything. He’ll probably be good at rehab, too.”

The Angels, of course, are no stranger to injuries, as Trout gives them 10 players who are currently on the DL. However, most of the club’s injuries have been to pitchers. Outside of Luis Valbuena missing the first month of the season and Yunel Escobar hurting his hamstring a couple weeks ago, the Angels have had few absences in their everyday lineup this season.

Unfortunately for the Angels, a relatively healthy starting lineup hasn’t translated into success. The Angels are in the bottom half of the American League in most offensive categories, and that’s with Trout having another MVP-caliber season. Without Trout in the lineup for at least six weeks, the Angels could be in serious trouble.

“I think you’ll feel that impact,” Angels GM Billy Eppler said Monday. “The team will require multiple people stepping up in his absence. The team will continue to fight, as it always does, but you know you’re losing the heart of your order and the heart of your defense and a leader in the dugout and on the bench. It’s something to absorb, there’s no doubt. But I know the guys in the clubhouse will do their darndest to absorb it.”

The Angels have called up Eric Young Jr. to take Trout’s spot on the roster. Cameron Maybin figures to step into Trout’s position as the primary center fielder with Ben Revere seeing an uptick in playing time in left field. But with Revere’s struggles this season, Young could end up seeing a significant amount of time in left field. Prior to being promoted, the speedy Young was hitting .354 at triple-A.

Defensively, the speed of Maybin and Revere should avoid a significant drop-off, but there appears to be little chance of the Angels replacing Trout offensively. The likes of Revere, Valbuena, Calhoun, Albert Pujols, and Danny Espinosa all need to be more productive than they’ve been up to this point in the season if the Angels are going to survive without Trout. In games Trout has missed this year, the Angels are 3-4.

On the surface, the injury to Trout would seem to be too much for the Angels to overcome, signaling the beginning of the end of their 2017 season. Trout is by no means done for the season, and on paper, the Los Angeles roster has the talent to cope without their MVP. But with so many pitchers injured and so many position players underperforming, Trout has carried the Angels for much of the season. There’s little evidence that the team is ready to play without him for an extended period of time.