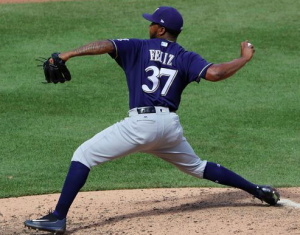 The NL Central-leading Milwaukee Brewers have been one of the biggest surprises in baseball this year. One of the most surprising aspects of their success is that they’ve done it without their opening day closer, Neftali Feliz. Feliz has struggled mightily this season, first to the point of losing his job as the team’s closer and now to the point of losing his roster spot altogether. On Wednesday, the Brewers decided to designate Felix for assignment, effectively ending his brief tenure with the club.

The Brewers cutting ties with Feliz coincides with the club activating Matt Garza from the 10-day DL. Garza spent the minimum amount of time on the DL and his return will be welcomed by the Milwaukee rotation.

Meanwhile, Feliz turned out to be anything but a welcomed addition to the Milwaukee bullpen this season. The Brewers signed Feliz over the winter, expecting him to become their closer. If nothing else, the club assumed he’d be a reliable bullpen arm and veteran presence on a young, rebuilding team. But things did not turn out as planned.

To his credit, Feliz has just one blown save this year. He’s collected eight saves in nine opportunities. However, after being nearly flawless during his first seven outings of the season, things went downhill fast for the 29-year old. After a few bad outings toward the end of April, Feliz finished the first month of the season with a 5.91 ERA.

From there, things only got worse. By the middle of May, Feliz had been removed from the closer’s role in favor of Corey Knebel, who has posted a 1.11 ERA this season. But Feliz did not respond well to losing his job as the closer. In five appearances in June, Feliz allowed five earned runs in just four innings of work. The Brewers have finally grown tired of waiting for him to turn things around and decided to part ways with the former Rookie of the Year.

The rest of Milwaukee’s bullpen, outside of Knebel, hasn’t been all that spectacular this year. But they’ve been good enough to move on without Feliz. Jacob Barnes had one disastrous outing against the Giants last week, but aside from that outing, he’s been a steady contributor this year. Carlos Torres has also been one of Milwaukee’s primary setup men this season. He’s had some troubling outings over the past couple of weeks but had been quite reliable prior to that.

Milwaukee’s bullpen is far from dominant, but they have a chance to be solid, even without Feliz. Knebel has proven to be reliable in the closer’s role, so that position is not an issue. The Brewers are also hopeful that top pitching prospect Josh Hader may be able to contribute out of the bullpen after getting his first call-up earlier this month. Hader projects as a starter long-term, but in the short-term, he has the stuff to make an impact in the Milwaukee bullpen. If the Brewers expect to remain atop the NL Central, they at least need a serviceable bullpen.

As for Feliz, he’ll end up being a free agent if the Brewers can’t find a trade partner for him. Milwaukee will likely have to take on most of his salary if they expect to unload him in a trade. As a free agent, Feliz has enough of a track record to garner interest from teams that are desperate for bullpen help. But based on his performance this season, there’s no guarantee he’ll end up making much an impact in the majors the rest of the season.