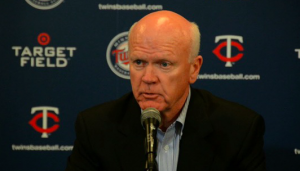 The Minnesota Twins have fired their general manager and executive vice president Terry Ryan. The team made the announcement Monday, while also naming assistant GM Rob Antony as the team’s interim GM. The Twins are 33-58 this season, owners of the worst record in the American League. The firing ends Ryan’s second stint as the team’s GM. Ryan resigned in 2007 after 12 years with the Twins, but returned as the GM following the 2011 season.

“Since joining our organization as a player in 1972, Terry has been a dedicated, loyal and respected member of the Minnesota Twins family,” Twins owner and CEO Jim Pohlad said Monday when making the announcement. “Terry has been a gifted leader of the baseball department for over 18 seasons. It is impossible to overstate his contribution to our game, our team and the Upper Midwest baseball community. The decision to part ways with Terry was difficult, painful and not obvious. We are extremely grateful and very thankful to Terry, his wife Karilyn and their family for being a part of the Minnesota Twins.”

The Twins have not made the playoffs since Ryan resumed his duties as GM in 2011 after serving as a senior advisor from 2007 to 2011. Minnesota appears destined to finish last place in the AL Central this season for the fourth time in the last six years.

Anthony takes over as the interim GM after holding the position of assistant GM for nine years. With two weeks until the non-waiver trade deadline, his job trying to turn the Twins around begins immediately.

“While disappointed we were unable to bring Minnesota a third world championship, I leave the GM post with immense pride in being part of the Twins organization for the better part of three decades,” Ryan said Monday. “I’m grateful for the leadership opportunities provided by the Pohlad family; the collaboration and talents of my colleagues in the front office; the hard work and dedication of our manager, coaches and clubhouse personnel; the commitment and professionalism of our players; the passion and attention to detail of our Minor League staff and scouts; and most importantly, the incredible support of our fans.”

During his two stints as GM, Ryan was responsible for acquiring players such as David Ortiz, Joe Mays, Joe Nathan, Francisco Liriano, and selecting Johan Santana in the Rule 5 Draft. He was originally drafted by the Twins in 1972 as a pitcher and played four minor league seasons before suffering a career-ending injury.

Ryan departs Minnesota with the following words: “It’s been an honor to be part of the Twins organization and I wish everyone nothing but the best going forward.”