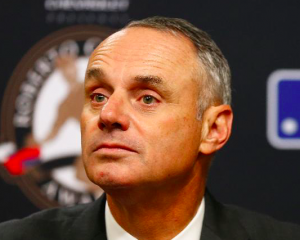 MLB Commissioner Rob Manfred sat down with the game’s owners Thursday in Houston, as the group discussed possible rule changes. Among the issues discussed and possible changes presented by Manfred were restrictions on defensive shifts, limits on pitching changes, and pitch clocks. Manfred has been pushing to improve baseball’s pace of play since he became commissioner in January 2015, and many of the potential rule changes discussed are related to the pace of the game.

“The point of the conversation today was that the game has changed dramatically,” Manfred told reporters following the meetings. “It’s changed organically. It kind of has flowed where the competitive juices of managerial and general managerial decisions have taken it. And the question is, you take a snapshot after 40 years of that and you say, wow, here’s what it looks like, here’s what it used to look like and should we be thinking about what has occurred and whether we want to allow it to continue to go on on the path it’s on?”

“You can make an argument that more relievers have lengthened the game, more pitching changes has slowed the pace of the game and the unbelievable effectiveness of those relief pitchers have robbed some of the action from the game,” Manfred said.

Until the second half of last season, offense has been on the decline since 2003 when drug testing was finally implemented league wide. Meanwhile, strikeouts have risen over the past decade, from 12.74 every nine innings in 2006 to 15.57 this year. The average length of a nine-inning game is right around three hours, with Manfred illustrating his point by referencing a 1960 World Series game that lasted just two hours and 36 minutes despite 19 runs being scored.

Major League Baseball instituting a 20-second clock for pitchers in between pitches is one of the more controversial issues on the table. “Our view of the pitch clock is that we feel it’s been effective in the minor leagues,” Manfred said. “Our evaluation of that is, the more we can have on the field, constant reminders so it’s in front of people’s minds, the better off we are in terms of continuing to move the game along. And I think the clock is probably the quintessential example of the reminder that keeps pace in people’s minds. And, quite frankly, the data shows that people don’t violate the 20-second. With or without a clock. It’s a reminder that moves things along.”

More than anything else, Manfred wanted to give the owners some things to think about in terms of the way the game has changed and possible rule changes that may help the game adapt to those changes. He says no changes are imminent. “We are really not at the point of making recommendations or having the owners make decisions about what if any changes are necessary,” he said. However, Manfred is not shy about his desire to see some changes made, possibly as soon as next season.