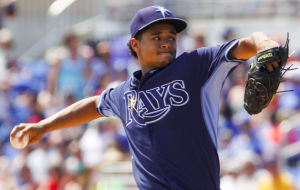 The Atlanta Braves are not what you would call a bona fide contender at the moment. They began Tuesday three games under .500 and 8.5 games out of first place in the NL East. But that may not stop the Braves from acting like contenders during the summer trade season. Reports out of Atlanta indicate the club is interested in acquiring a starting pitcher this summer. More specifically, the Braves are looking to acquire a high-end starting pitcher.

The Braves reportedly had scouts watching Oakland A’s righty Sonny Gray over the weekend. Gray has not had his best season, posting a 4.45 ERA over 11 starts. Nevertheless, several teams are already interested in acquiring him before the July 31 trade deadline. The Braves, according to reports, are also interested in Jose Quintana of the White Sox and Chris Archer of the Rays.

Of course, the Braves are not so naive as to think that they are one pitcher away from making a serious postseason run. However, pitchers like Gray, Quintana, and Archer all have one important thing in common: they are under contract beyond this season. None of the pitchers the Braves are interested in would be traditional trade-deadline rental players. Instead, the Braves are looking for an ace who can anchor their rotation in the years to come.

Atlanta made several additions to its rotation over the winter. They acquired veteran arms like Bartolo Colon, R.A. Dickey, and Jaime Garcia. The idea was to give some of their young pitchers more time to develop in the minors. The Braves also thought a few veteran arms could give them an outside chance of competing in 2017.

Thus far, Atlanta’s rotation has been a mixed bag. Colon was dreadful before being placed on the DL earlier this month. Dickey and Garcia have been unspectacular. Even ace Julio Teheran has struggled. Part of the blame can be placed on Atlanta’s new stadium, which has proven to be quite hitter-friendly.

But a new stadium can’t take all the blame for the struggles of Atlanta’s rotation. Clearly, the Braves are in need of an upgrade for both the short term and long term. That’s why frontline pitchers who are under contract beyond this season are of interest to the Braves. Atlanta is close to the end of its rebuilding project, and the Braves are almost ready to start competing at a high level. But the team’s pitching just isn’t there yet.

Lefty Sean Newcomb has been outstanding in his first three big league starts. The Braves also have a few other quality pitching prospects who should be ready for the big leagues within the next year or so. But Atlanta still lacks a rotation leader, and the club believes Quintana or Archer could be the answer. The Braves explored trades for both pitchers over the winter, only to find the price to be too high. But this summer, Atlanta is ready to take another shot at acquiring a frontline starter.

The price to acquire a pitcher like Quintana or Archer likely hasn’t gone down much since the winter. However, the Braves do have one of the better farm systems in baseball. Atlanta likely has the prospects to meet the price for such a pitcher. It’s just a matter of whether or not the Braves are willing to give up what it’ll take the get the kind of pitcher they covet.

If the Braves are willing to pay the price for a frontline starter like Archer or Quintana, it would undoubtedly alter their outlook for 2018 and beyond. The Braves appear to be quite serious about finding an ace who can lead them into the future. They wouldn’t be the most traditional buyer, but the Braves could end up making a huge splash in the trade market this summer.