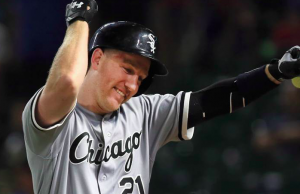 There’s still a week left in the month of May but the Boston Red Sox are already looking outside the organization at ways to improve their team via trade. Specifically, the Red Sox are reportedly looking to upgrade at third base with the now injured Pablo Sandoval underwhelming early in the season despite coming to spring training in great shape and with renewed optimism. Whispers out of Boston indicate that the Red Sox have been scouting Chicago White Sox third baseman Todd Frazier.

Sandoval has been on the DL for nearly a month with a knee injury, but before the injury, he was hitting just .213 with an OPS of .646, well below his career averages and even below what he produced during his first year in Boston in 2015. Most everyone else in Boston’s lineup is having a productive season, but the Red Sox still find themselves in third place in what could be the most competitive division in baseball, and so they won’t hesitate to upgrade at any position in order to give their postseason chances a boost.

Currently, Deven Marrero and Josh Rutledge are helping to fill in for Sandoval at third base, but neither is considered a long-term answer for a position that demands a great deal of power and offensive productivity. Brock Holt, who is also on the DL but due back soon, is another option. However, he’s not a true third baseman and he got off to a rough start this season, hitting just .133 before being forced to the DL with vertigo, a condition that could potentially resurface later in the year. The Red Sox also have no intention of rushing prospect Rafael Devers, who is still in double-A.

Thus, the Red Sox either have to stick it out with Sandoval and hope that he can both be productive and stay healthy or look for a third baseman elsewhere. Even with Sandoval owed more than $40 million beyond this season, the Red Sox appear to be looking for a solution at third base from outside the organization, with Frazier perhaps their top target.

Frazier himself is not having a great year, despite the White Sox being a little better than expected this year. He’s hitting just .195 with an OPS of .638. However, as a right-handed hitter who belted 40 home runs last season, his bat could play well at Fenway Park, and if nothing else, he could provide some power for the Red Sox, something Sandoval may or may not do the rest of the season.

Meanwhile, the White Sox will likely be eager to part with Frazier. He’s making $12 million this season and Chicago may even be willing to cover a chunk of that if they can receive a quality prospect or two from the Red Sox. This leaves the door wide open for a Frazier to Boston trade to happen at some point, especially after the two teams worked out a trade over the winter for Chris Sale.

Of course, beyond Frazier, the Red Sox may have several other options at third base. Mike Moustakas could be available if the Royals continue to struggle. Jhonny Peralta could also be an interesting option, as he could have trouble finding playing time after coming back from the DL last week. Yunel Escobar, Eduardo Nunez, Trevor Plouffe, and Danny Valencia may also be options around the trade deadline, but none offer as much upside as Frazier or Moustakas.

How soon the Red Sox may be willing to acquire a third baseman to replace Sandoval permanently remains to be seen. If they want to move quickly, Frazier and Peralta would be the most likely candidates to be traded in the near future rather than late July. Nevertheless, the Red Sox are rumored to be looking for a third baseman, and it wouldn’t be a surprise to see them make a move for Frazier or anyone else who can man the hot corner, perhaps sooner rather than later.