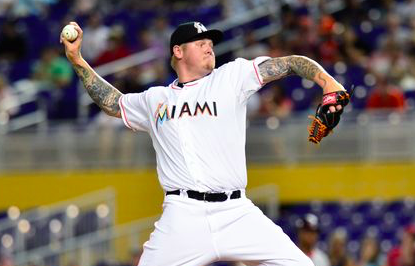 The Washington Nationals look poised to recapture the NL East division crown this season, and they will be bringing in veteran pitching reinforcements to help finish the job. The Nationals have agreed to promote Mat Latos to the big leagues when rosters expand on Thursday. Latos signed a minor league deal with Washington in June after being designated for assignment by the Chicago White Sox.

According to his contract, Latos could have opted out of his deal with the Nationals on Monday if he were not added to the big league roster. However, the team and Latos have made an agreement for Latos to remain in the minors until Thursday when major league rosters can expand to 40, at which point he will be on his way to Washington.

Latos got off to a great start this season for the White Sox. In five starts during the month of April, he was 4-0 with a 1.84 ERA. However, it was all downhill from there, as Latos struggled mightily throughout May and the early part of June before the White Sox gave up on him.

The Nationals picked him up on a minor league deal, and since then he has made six minor league starts, three at rookie ball to get some work after an extended layoff and three in triple-A. In his three starts at triple-A, Latos has a 1.06 ERA across 17 innings. He’s unlikely to make another triple-A start before he’s promoted to the majors on Thursday.

It’ll be interesting to see how Latos fits in with the Nationals in September. With Stephen Strasburg and Joe Ross currently on the DL, it wouldn’t be hard for Washington to make room in its starting rotation for Latos. Youngsters A.J. Cole and Lucas Giolito are currently holding down spots in the back end of Washington’s rotation, but neither has impressive numbers in the majors this season. Reynaldo Lopez is another young starter who could spend September in the big leagues, but like Cole and Giolito, he has struggled in the majors.

Latos could slot into the rotation depending on how much work the Nationals want to give their young starters during the final month of the season. The presence of Latos could also help the Nationals give added rest to the likes of Max Scherzer and Gio Gonzalez late in the season, assuming they’re able to wrap up the NL East with time to spare. This could help the Nationals set up their rotation for the postseason.

Latos would be eligible to pitch in the postseason for the Nationals, although barring Washington being hit with a multitude of injuries, that scenario seems unlikely, even in a bullpen role. Nevertheless, Latos is a good candidate to eat up some innings for the Nationals, as they look to more or less coast to a division title. If he can help the Nationals keep their pitchers fresh and rested for the playoffs, he will have done his job.