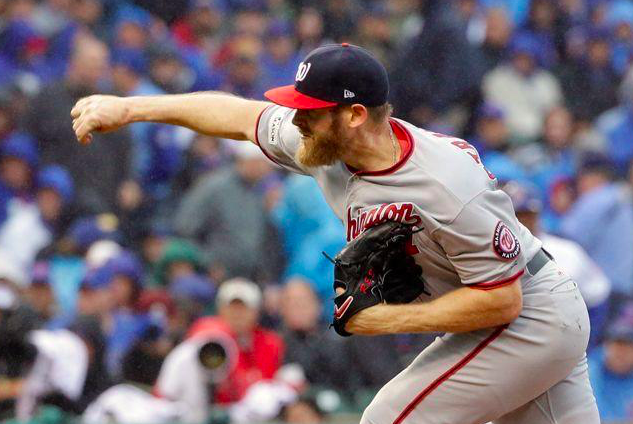 Two games into the NLCS, the Washington Nationals are halfway to reaching the World Series for the first time in franchise history. The Nats took the first two games of the series from the St. Louis Cardinals on the road, giving them three chances to win two games in front of their home fans. While Monday’s Game 3 isn’t an elimination game for St. Louis, it’s surely a must-win game for the Cardinals.

Ever since they scored 10 runs in the 1st inning of Game 5 of the NLDS against the Braves, the entire St. Louis lineup has gone ice cold. Both Anibal Sanchez and Max Scherzer carried no-hitters into the late innings of Games 1 and 2, respectively, completing silencing the Cardinals. The Cardinals have managed just one run on four hits over the first two games of the series. They’ve also scored one run or less in four of their seven playoff games. The St. Louis pitching staff is holding up its end of the bargain, allowing just five runs over two games. But the Cardinals need to find a way to score runs as soon as possible.

While they wait for the offense to get going, the Cardinals will lean on Jack Flaherty in Game 3. The 23-year-old was brilliant in his two starts against the Braves in the NLDS, allowing just four runs over 13 innings while striking out 16. His one weakness has been the long ball, giving up a home run in each of his starts against the Braves. Flaherty’s only previous experience facing most of Washington’s hitters came last September when he walked five but only allowed one run over five innings.

The Nationals will counter with Stephen Strasburg, who has also been effective during the postseason, starting two games against the Dodgers after tossing three shutout innings in the Wild Card Game. He’s pitched six innings in both of his postseason starts, and the Nationals will likely push him at least that long given the state of their bullpen. Strasburg faced the Cardinals twice during the regular season, allowing three runs over 11.2 innings while striking out 15. Of course, the most recent start came in mid-September, so the Cardinals got a good look at him.

The X-factors for the Cardinals in Game 3 are Dexter Fowler and Kolten Wong. The two are a combined 7 for 55 in the postseason, but as the hitters at the top of the St. Louis lineup, they hold the key to the team’s success. The Cardinals need them to get on base in front of Paul Goldschmidt and Marcell Ozuna, who are the only St. Louis hitters producing during the playoffs. Ozuna, in particular, could do some damage against Strasburg, going 14 for 44 (.318) with five extra-base hits in his career against the Washington starter. But he needs the hitters ahead of him to get on base.

The Cardinals can’t possibly stay ice cold forever. Getting away from home could actually help take some of the pressure off. St. Louis has actually had their two best offensive performances this postseason on the road. Keep in mind that the Washington bullpen is vulnerable is Strasburg can’t go more than five or six innings. They’re due to for a breakout game that gets them back in the series. St. Louis wins 6-5.