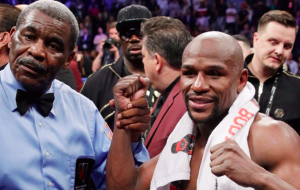 Nevada sports books breathed a huge sigh of relief when Floyd Mayweather was able to take down Connor McGregor with a TKO in the 10th round of Saturday’s historic fight in Las Vegas. A Mayweather win is exactly what the bookmakers were hoping for, and it’s a result that prevented potentially disastrous consequences for sports books throughout the state.

Despite long odds at defeating the undefeated Mayweather, McGregor gave bookmakers a scare early in the fight, winning the first three rounds of the match and showing the potential to pull off a historic upset. However, Mayweather proved to be too much for the UFC fighter to handle over the course of 10 rounds. In the end, both boxers were paid handsomely, viewers were entertained, and Vegas bookmakers made out quite well.

The Mayweather-McGregor duel saw record-breaking action at sports books. Some Las Vegas bookmakers reported that twice as much money was bet on this fight than the 2015 fight between Mayweather and Manny Pacquiao.

“It’s mind-boggling to me the interest in this fight,” said John Avello, director of Wynn sports book. “It’s constant action. It’s quite a handle.”

Under normal circumstances, that much action would have been good news for the sports books regardless of who won the fight. However, based on the way the public bet on the fight, the Las Vegas books needed a Mayweather win in the worst possible way.

Despite Mayweather opening as a -2,500 favorite, the public bet heavily in favor of McGregor, sensing (or perhaps just hoping for) an upset. By the time betting closed, Mayweather had fallen to a mere -500 favorite, with most books listing McGregor as a 4-1 underdog. However, while the larger volume of bets favored McGregor, more money was actually on Mayweather.

For example, the Westgate reported that 87% of its tickets bet on McGregor. However, 85% of the money spent was on Mayweather. In total, Nevada sports books took six wagers of $1 million, all on Mayweather to win. For reference, just one $1 million bet was placed on the most recent Super Bowl, which showcases the pure volume of money placed on this fight.

With the way bets were placed on the Mayweather-McGregor fight, sports books needed Mayweather to come out on top one way or another, preferably in the later rounds. A McGregor win, especially in the early rounds, would have been devastating. By some estimates, Las Vegas bookmakers could have lost close to $50 million had McGregor pulled out the win, so you can imagine how nervous the sports books were when the Irish UFC champion got off to such a fast start in the early rounds.

Of course, with Mayweather eventually pulling out the win, all is well that ends well for the bookmakers. In fact, most Nevada sports books reported at least six- or seven-figure winnings as a result of Mayweather’s TKO of McGregor. For most sports books, it was one of the biggest wins to ever come from a boxing match, even if they had to sweat it out a little.

“After the dust settled, we finished on the positive side,” said Jay Kornegay, head oddsmaker at the Westgate. “If it went 25 seconds longer, would have been a little better, but we’re very satisfied with the result.”