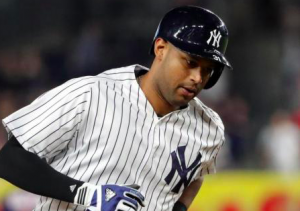 Amidst a skid that’s threatening their hold on first place in the AL East, the New York Yankees have lost another outfielder. The Yankees have announced that Aaron Hicks is headed to the DL with an oblique injury. The club estimates that he’ll be out at least three or four weeks. The injury to Hicks has prompted the Yankees to activate Jacoby Ellsbury, who has missed more than a month of action because of a concussion.

Hicks suffered the oblique strain during Sunday’s game against the Rangers during a check-swing in the 1st inning. He remained in the game for a few innings and even robbed Jonathan Lucroy of a hit at the warning track. But he was eventually removed from the game due to tightness in his oblique. An MRI after the game revealed the extent of the injury and gave Hicks a three-to-four-week timeline for his return.

“It’s very frustrating,” Hicks said. “I want to be out there battling with my team, and now I can’t do it.”

Hicks is in the midst of a breakout season in his second year in New York. He’s hitting .290 with an OPS of .913. He was invaluable to the Yankees while Ellsbury was on the DL, as Hicks was forced to play every day. Prior to Ellsbury going on the DL, the Yankees employed an effective four-man rotation in their outfield.

The injury to Hicks has forced the Yankees to activate Ellsbury prior to Monday’s series opener with the Chicago White Sox. Ellsbury started a minor league rehab assignment over the weekend. But he’s only played in two minor league games. Ideally, Ellsbury would have been given more time in the minors after sitting out a month, especially since he’s returning from a concussion. However, the loss of Hicks to the DL will force the Yankees to bring him back a little sooner than expected.

The Yankees lacked outfield depth while Ellsbury was out. They will likely continue to lack outfield depth now that Hicks has gone to the DL. Short of bringing up prospects like Clint Frazier or Dustin Fowler, the Yankees are limited in the outfield to Hicks, Ellsbury, Brett Gardner, and Aaron Judge. If one of those four is on the DL, the Yankees have limited flexibility in their outfield.

Unfortunately, New York’s injuries are not limited to Hicks. Matt Holliday is dealing with issues related to an allergic reaction. Also, Starlin Castro is struggling with a wrist injury. Both have been important contributors to the team’s success this season. Holliday’s status going forward is uncertain, but Castro is confident he’ll be able to play Monday.

The injuries are piling up at a time when the Yankees are struggling. New York has lost 10 of its last 12 games, bringing them into a tie for first place in the AL East with the rival Boston Red Sox. Despite struggling during the month of June, the Yankees are by no means panicking.

“You worry about the injuries,” Yankees manager Joe Girardi said after Sunday’s loss. “But you’ve got to keep it in perspective. It’s a two-week period. We’re still tied for first place. We had a pretty tough two weeks. We’re still in a good spot. We need to turn it around. We need to get some things straightened out.”

The Yankees are optimistic that the return of Ellsbury can help offset the loss of Hicks. Ellsbury’s numbers are not quite as impressive as Hicks. However, before his concussion, he was arguably having his best season since coming to New York. If Holliday and Castro can also return to the lineup sooner rather than later, the Yankees should be able to right the ship and get things moving in the right direction again.