Mike Gundy will forever be known for one infamous post-game rant. People will always remember him as that guy who went off on a reporter for being critical of his quarterback. In the minds of some, he will forever be a guy who was proud to shout that he is a man and that he is 40. But next season he could end up changing his legacy forever.

He could become Mike Gundy, head coach of the Oklahoma State Cowboys—national champions. 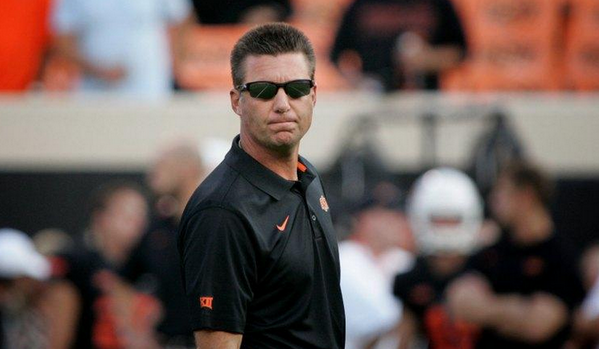 So—how in the world can a plausible argument be made for these guys winning it all?

As for the Big 12, Oklahoma is getting a little more credit than they deserve. Yes, they are getting back a Heisman candidate in Baker Mayfield. But they lost both running backs, their No. 1 wide receiver, and their head coach. Lincoln Riley was only the offensive coordinator for the last two seasons, so it is hard to say the transition is going to be seamless.

Oklahoma State, on the other hand, will be under the leadership of head coach Mike Gundy for the 13th year. Quarterback Mason Rudolph is a third-year starter and will start the season as a potential Heisman candidate. He’ll be throwing a lot to a pair of guys he is very familiar with, James Washington and Jalen McCleskey. Running back Justice Hill will make sure teams can’t focus too much on Oklahoma State’s passing game.

The Cowboys were one of the best offenses in the country last season. They ranked No. 14 in total yards and No. 17 in scoring. They were one of just two major programs that had a 4000+ yard passer, 1000+ yard receiver, and a 1000+ yard rusher—and they are all back this season.

So—the question then becomes whether they can they win it all.

Clemson’s offense has been gutted, so it is hard to see them being in contention this season. Oklahoma has to hope it can find a new star running back and wide receiver. Alabama will certainly be tough once again, but it remains to be seen how their new offensive coordinator will work out. Washington, Ohio State, USC, Penn State, Michigan—the list of potential contenders could go on and on.

But the main takeaway is that the big dogs from last season (Alabama, Clemson) are not going to be as big. That means the door could be wide open for someone to walk (or pass) right through.

That ‘someone’ could very well be a team whose head coach is a man–although one who is no longer 40.