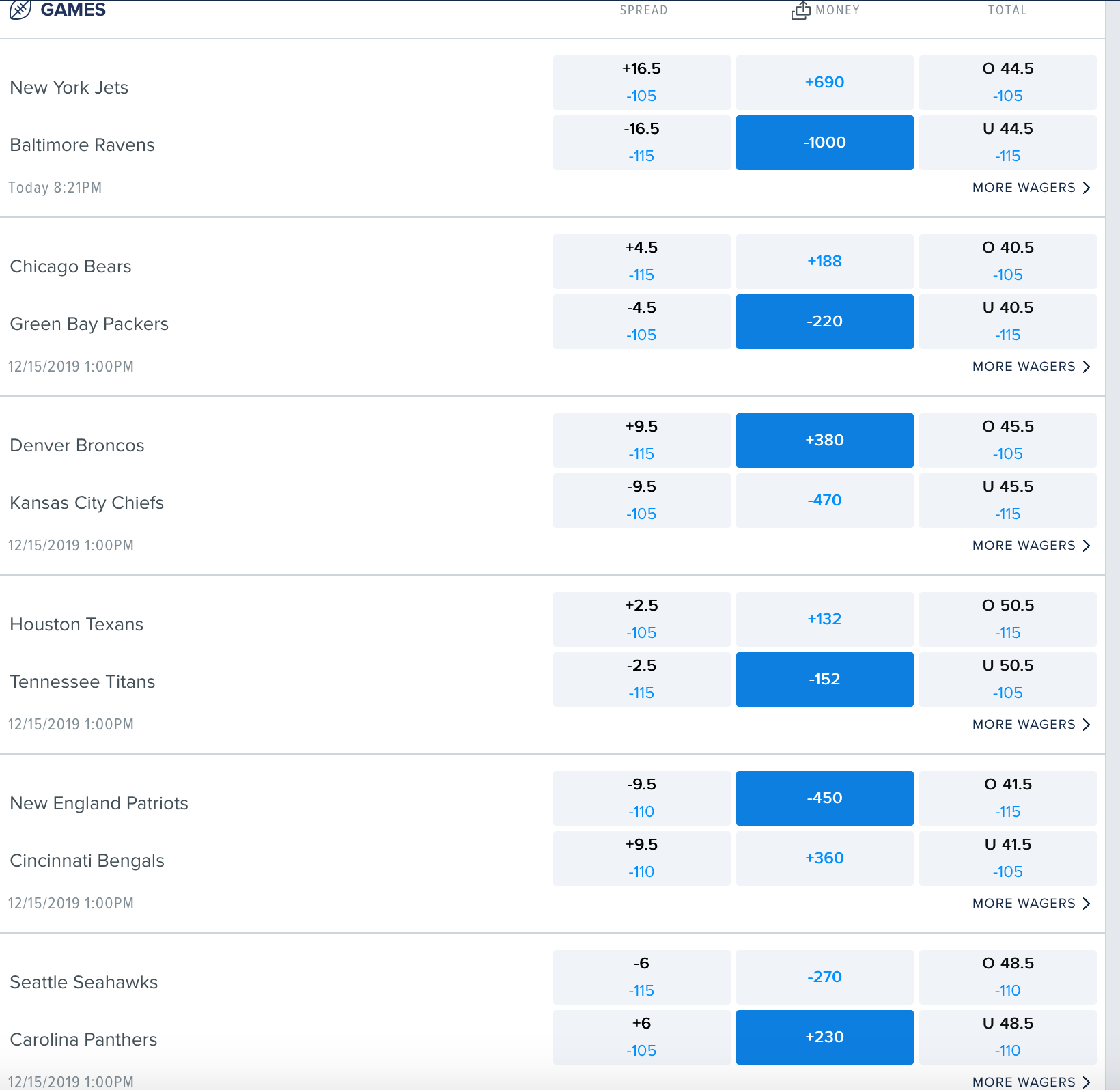 Picks and predictions SU are below courtesy of our writers. To receive Legendary bettor Jon Price’s bets against the spread please call 1-866-441-2711

There are two ways to bet on the outcome of an NFL Game this weekend. It’s against the spread commonly called (ATS) and then there’s Straight up or Moneyline bets.

As we’ve covered straight up NFL picks all season long, it’s important to note that we prefer to give our bettors plays that are ATS as they are typically more profitable than moneyline/straight up betting picks. With that being said we will give out some of the most common predictions and sports betting tips for this weeks NFL Games:

The biggest game of the week starts on Thursday with the Baltimore Ravens (the best team in the NFL this season) facing off against one of the worst in the New York Jets. The current spread is +17 points for the Jets with a total of 44.5 points. Unfortunately you’re here for the straight up pick and we know with almost 100% certainty that the Baltimore Ravens will win outright The bad news is to bet on this you have to wager a lot of money to get a small return thus making the risk not worth the reward.

So lets now focus on the rest of the straight up NFL Picks for week 15 of the NFL:

The Chicago Bears are +188 to the Green Bay Packers at -220 straight up this week with the Bears looking to win after losing on opening day of the 2019 NFL season. The Denver Broncos are playing the Kansas City Chiefs coming off their biggest game of their life beating Tom Brady and the Pats in a revenge game. The Broncos are at +380 and have great value for straight up bettors vs the Chiefs -470.

The Houston Texans are +132 vs the Tennessee Titans who are -152. The New England Patriots are -450 vs the leagues worst team +360 Cincinnati Bengals.

One of the closest games on Sunday is the Tampa Bay Buccaneers at -190 vs the Detroit Lions at +164. The other game on that level is the worst two teams playing The horrific New York Giants @ -174 straight up versus the Miami Dolphins at +150. The struggling Eagles have great value to beat the Washington Redskins at -230 vs. +198 being our top straight up pick of the day.

The last early game to bet on is the Seattle Seahawks -270 against the Carolina Panthers at +230.

Rounding out the rest of the games the last Monday night game is the Indianapolis Colts +330 vs the New Orleans Saints -410. The Buffalo Bills will play the Pittsburgh Steelers close with the Steelers getting -122 SU vs the Bills at +106. The Rams are expected to blow out the Cowboys but are only -126 vs the struggling Cowboys +110 straight up. The Atlanta Falcons are +400 vs the league leading San Francisco 49ers at +500. Finally the Vikings are -132 vs the Chargers +116.

As you can see it doesn’t really make sense to wager on most games straight up as the risk is not commensurate with the rewards. Work with a trusted betting adviser and let’s all make more money this weekend.