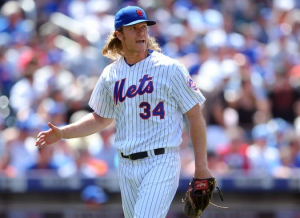 After originally denying reports that he was pitching with a bone spur in his elbow, New York Mets starter Noah Syndergaard cleared the air with reporters Wednesday. Syndergaard admitted that he lied when asked about the bone spur earlier in the week, but says that the injury is “pretty insignificant.” One day after Syndergaard denied the reports, Mets GM Sandy Alderson announced that both Syndergaard and lefty Steven Matz were dealing with bone spurs in their elbow.

Despite finally coming clean about having the bone spur, Syndergaard insists that it will not have an impact on his performance. “I can pitch without pain and I will be ready to go in five days,” Syndergaard said Wednesday. “As long as I am staying on my anti-inflammatories, my mechanics are on point and I am able to go out there every five days and compete, I should be fine.”

Of course, Syndergaard’s words may be a little hard to believe after his poor outing Monday against the Washington Nationals. Syndergaard gave up five runs on seven hits and was pulled after three innings. It was his shortest start of the season aside from when he was rejected against the Los Angeles Dodgers last month. In his previous start before Monday’s disaster against the Nationals, Syndergaard had to leave early after complaining of elbow discomfort.

On Wednesday, Syndergaard stood by what he said Monday, which is that his elbow was not the reason for his struggles against the Nationals. “Honestly, I just think it was because I felt really, really good out there,” he said. “My mechanics were kind spiraling out of control. I felt too good. I was trying to throw it harder and harder, and it doesn’t work like that.” Syndergaard added that he was too focused on his velocity and was “sacrificing location.”

The Mets say that nothing is structurally wrong with Syndergaard’s elbow and he will not risk further injury by continuing to pitch. Having surgery that could keep him out for the rest of the season does not appear to be on the table right now. Syndergaard is expected to make his next start on Monday against the Chicago Cubs, and as long as he can avoid another poor outing or another early exit, he may be able to put all the talk about his elbow behind him.

Unfortunately, the same may not be true with Matz, who appears to be suffering a lot more discomfort in his elbow than Syndergaard. Matz also struggled in his last start and has had a rough June after being dominant throughout the month of May. The Mets pushed his next start back a day from Wednesday to Thursday, but Alderson says there’s not much the Mets can do with Matz except hope he can tolerate the pain and remain effective in order to put off surgery until after the season.

As long as both Syndergaard and Matz can tolerate the pain of pitching with a bone spur, both figure to stay in New York’s rotation. That appears to be a little easier for Syndergaard than for Matz, but the key for both pitchers, as well as the Mets, is for the team’s two young aces to be able to pitch effectively despite elbow pain. If not, the Mets rotation, as well as their playoff hopes, could take quite a hit.