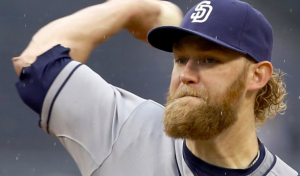 The San Diego Padres have been one of the most active sellers this season, already trading four notable players, most recently Melvin Upton Jr., and they won’t appear to be done just yet. According to reports, the team is working hard and making progress on a trade involving starting pitcher Andrew Cashner. There was even speculation that he could be a last-minute scratch before his start Tuesday against the Toronto Blue Jays because a move was close. However, Cashner did make the start, pitching six innings and getting a no decision in a game the Blue Jays won in extra innings.

Cashner was exceptional with the Padres in 2013 and 2014, but he’s posted modest numbers the past two seasons, failing to establish himself as the frontline starter many expected him to become. However, in a market that’s thin on top-flight starting pitchers, especially with former Padres pitcher Drew Pomeranz already off the market, Cashner has become a viable option for teams looking to add a starter. In fact, after his start last Thursday, Cashner told reporters: “I know I’m going to be traded. It’s just part of the game, part of where the season’s at.”

There have been at least a handful of teams connected to Cashner over the past couple of weeks, including the Blue Jays, Orioles, Rangers, Marlins, and Giants. He will be a free agent after the season, so teams are looking at Cashner primarily as a rental piece. After a disastrous outing against the Los Angeles Dodgers earlier this month, Cashner has looked much better in his last three starts, perhaps boosting his value or getting more teams involved. Tuesday in Toronto, Cashner allowed three runs on four hits over six innings against a rather potent Blue Jays lineup.

The most recent reports name the Blue Jays and Marlins as the most serious contenders for Cashner, with the Rangers also involved. The Blue Jays may be on the verge of moving Aaron Sanchez to the bullpen to conserve his innings, which would create a vacancy in their rotation that perhaps Cashner could fill. The Marlins have struggled at the back end of their rotation all season, and they now have a bigger need after Wei-Yin Chen went on the DL. The Rangers have also been a victim of injuries in their starting rotation and are looking for reinforcements, making Cashner a possibility.

Following Tuesday’s start, Cashner is unlikely to pitch again before the trade deadline unless the Padres were to move him up in the rotation and start him on Sunday. Teams considering Cashner have seen all they’re going to see from him before the deadline, which could prompt them to make their final offer to the Padres, meaning trade talks could start to intensify. At this point, it’s hard to envision Cashner not being traded, but which team will get him is anybody’s guess.