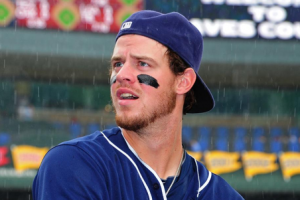 Currently sitting 12 games under .500 and 9.5 games out of a playoff spot, the San Diego Padres are one of the teams that’s likely to be active sellers as the non-waiver trade deadline approaches. But one player the team won’t be looking to trade is first baseman Wil Myers. Reports indicate the Padres have no desire to trade Myers this summer, but that they are open to trading starting pitcher Drew Pomeranz.

The Padres got a head start on trading away players and adding pieces for the future when they traded starter James Shields and reliever Fernando Rodney last month, leaving many to think that Myers could also be used as a trade chip as the team continues to rebuild. However, Padres Owner Peter Seidler recently told the L.A. Times that Myers was not going to be traded. Padres Executive Chairman Ron Fowler also chimed in, saying Myers is “the type of guy we want to build this team around,” indicating the team would be interested in signing him to a long-term deal.

This season, Myers is finally replicating the numbers he put up as a rookie with the Tampa Bay Rays in 2013, except with even more power. He won’t become a free agent until after the 2019 season, so the Padres could choose to keep him and try building their club around him. Of course, with his breakout season and the fact that he’s controllable for a few more years, San Diego could get a rather substantial return if they changed their minds and decided to make him available in a trade.

Pomeranz, like Myers, was selected to the All-Star Team and will appear Tuesday in front of their hometown fans in San Diego. However, unlike Myers, the Padres appear open to trading him. Pomeranz is having an outstanding season, posting a 2.47 ERA across 17 starts, and since he won’t be a free agent until after the 2018 season, he’d also be able to fetch a hefty bounty for the Padres on the trade market. At the same time, Pomeranz could also be a key building block for the Padres over the next couple of years.

The core issue when deciding the fate of Myers and Pomeranz is that Seidler isn’t confident the Padres will be able to contend until at least the 2019 season, in which case Pomeranz would hit free agency a year too early while Myers could still be part of a contending team, even if the team doesn’t sign him to an extension.

San Diego recently spent more than any other team on the international amateur market. The Padres also had six of the first 85 picks in this years draft, so a flood of talent is about to enter the team’s farm system. Of course, it will take some time to cultivate all that talent, making Seidler’s assessment that the organization is still a few years away from competing a logical one.

This leaves players like Myers, Pomeranz, and a rather nice contingent of prospects the Padres currently have in triple-A stuck in limbo, waiting for the team’s long-term plan to come to fruition. This will increase the chances of Pomeranz being traded over the next few weeks, while at the same time making teams wonder if Myers could be acquired for the right price, despite San Diego’s front office being insistent that he will not be moved.