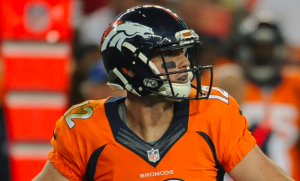 For the second straight season, the Denver Broncos figure to have one of the more intriguing preseason quarterback competitions. But unlike last year, former 1st round pick Paxton Lynch may prove to be a serious contender for the starting job. Reports out of Denver indicate that during the final two weeks of OTAs, something in Lynch started to click, making him appear to be a threat to incumbent starter Trevor Siemian when training camp gets underway later this summer.

Lynch saw action in three games as a rookie last year as Siemian’s backup. He completed 59% of his passes for just under 500 yards and two touchdowns. It wasn’t a lot of playing time, and it didn’t give Lynch much time to impress the Broncos. But with a year of life in the NFL under his belt and plenty of opportunities to take snaps during OTAs, Lynch is starting to feel more comfortable.

“The more reps I’m getting with these guys, the more I get to go against the defense and see the looks live compared to just on paper, it’s helping me a lot,” Lynch said at the end of Denver’s offseason program. “I think each practice I’ve progressively got better.”

Of course, the job is far from won for Lynch, as Siemian may prove difficult to unseat. Siemian had his ups and downs in 2016 in his first season as a starter. But he definitely had moments of brilliance in which he looked the part of an NFL starter.

However, Lynch was a 1st round pick for a reason. He has all the measureables in terms of size and arm strength. It’s just a matter of becoming more comfortable making reads and playing with confidence. Late in OTAs, Lynch was showing signs of that confidence.

Lynch seems to recognize that after being the backup last year, it’s up to him to prove that things should be different this season. Also, he doesn’t seem shy when it comes to talking about the battle between him and Sieman.

Having a new head coach in Vance Joseph may end up helping Lynch. New (and old) Broncos offensive coordinator Mike McCoy has installed a system that isn’t afraid to push the ball down field. Such an offense may be best suited for a tall quarterback with a big arm like Lynch rather than a game manager like Siemian.

Of course, Denver’s quarterback competition may be a long way from being over. A decision between Siemian and Lynch definitely won’t be made until after the Broncos play at least a couple of preseason games. It could even extend right up until the start of the regular season. With the progress Lynch made late in OTAs, he appears to be a threat to usurp the starting job from Siemian, ultimately giving Joseph and the Broncos a tough decision to make.