When it comes to rivalries in the NFL, the Dallas Cowboys and Philadelphia Eagles are one of the best. The games are always hard-fought, rarely ugly, and often a factor in the playoff race—and the first meeting of the 2016 season will be no different.

Dallas fans likely expected this season to be another stinker when Tony Romo went down—again. But that was before discovering what they had in Dak Prescott. While he may not put up monster numbers, he does what matters most—win. Of course, it helps that he has the best running game in the NFL, and it certainly doesn’t hurt that the defense has played above and beyond expectations the last couple of weeks.

As for the Eagles, well—you always have high hopes for a player that you take with the No. 2 pick in the draft. For the most part, Carson Wentz has lived up to the hype and played well—despite being injured for most the preseason.

However, his first three wins came against some pretty bad defenses, and only one had a good offense (Pittsburgh—which the Eagles defense neutralized). After losses to the Detroit Lions and Washington Redskins, the Eagles rebounded with a win over the Minnesota Vikings. However, the win was more despite Wentz (who went 16-28 for 138 yards, one touchdown, and two interceptions) and not because of him.

So—whose rookie can get the job done Sunday?

The Eagles will bring the hardest pass rush Prescott has faced all season. The Cowboys offensive line hasn’t allowed teams to get to Prescott very much (nine sacks, 22 quarterback hits—both second best in the league). It’s certainly helped that the running game is the best in the NFL (161.2 yards/game). Nothing keeps the pressure off a quarterback quite like the fear of getting gashed by the running game.

Should the Cowboys get Elliot going, the Eagles will be in trouble. They will not be able to blitz since they must worry about stopping Elliot or Alfred Morris which will give Prescott plenty of time to find someone downfield.

With Dez Bryant expected to play for the first time in weeks, it would not be shocking to see Prescott try to go deep a few times to him. As much as the Eagles like to blitz, Bryant will likely be facing man coverage a lot. If Prescott can connect on a couple of deep balls to Bryant, this could get ugly early.

The Eagles have a good defense (No. 5 overall), and they will have their hands full slowing down Elliot and Prescott. It wouldn’t be surprising to see the do well in the first half, but with how the Cowboys offense holds onto the ball (No. 1 in time of possession), they could very well get tired in the second half—which will be when the Cowboys secure the win.

The Dallas defense has done well against the better teams this season, but they have also given up some long drives this year and failed to stop teams when they needed to most. They’ve just been fortunate that the offense has been able to pull through for the team in the clutch.

Statistically, they are weaker against the pass (21st) than the run (10th) which does play to the strength of the Eagles offense—the pass. If Wentz can get on track with his receivers early on, the Cowboys could be in trouble. But the Dallas defense will be looking for the Eagles to pass and will do everything in their power not to allow Wentz time to throw–or think about where he wants to throw. 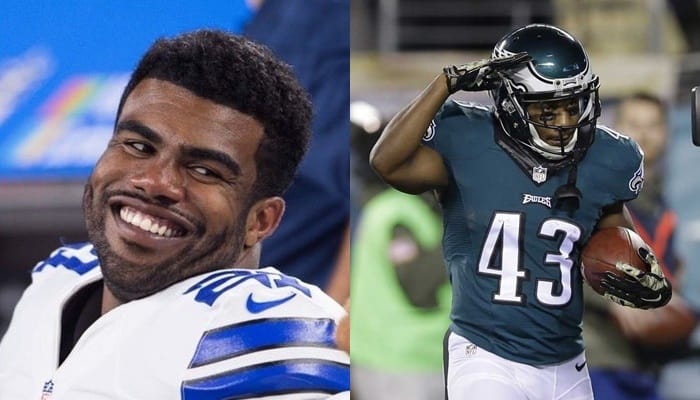 The lack of a running game in Philadelphia will certainly help the Dallas defense. The Eagles haven’t had a good running game in years and rarely try to establish one. The only game this season where the lead back got 20+ carries was the opener against Cleveland (Ryan Mathews, 22 carries for 77 yards).

However, they do like to make up for that with the screen pass; a play that few run better than their guy—Darren Sproles.

The Eagles will likely try to have Wentz spread the defense with the occasional deep ball; enough to keep the defense looking for it and not the screen pass. If they can manage to do that, they can probably break a few big plays against the Cowboys and maybe even a few long scores. If they can do that, and force the Cowboys to play catch up, the Eagles could neutralize Dallas’ best weapon (Elliot) and control the game.

Dallas will need to tackle. Wentz is probably going to make up for the lack of a running game much like Aaron Rodgers did against the Bears a week ago. The Cowboys can’t let all the little shifty guys the Eagles have get into space and break plays open. They must get them down as soon as they catch the ball and minimize gains.

If they can do that they will win—because the Eagles defense is not going to stop Elliot and Prescott. They may slow them down a little, but in the end, Prescott is going to give Jerry Jones a reason to say “Tony who?” and Elliot will further his case for MVP.