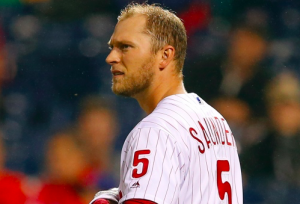 Even for a rebuilding team, the Philadelphia Phillies have had a disappointing season in 2017. With the worst record in baseball, now more than ever the Phillies are looking toward the future. That means cutting ties with veteran players, which is exactly what the Phillies did on Tuesday. The club has announced that they have designated outfielder Michael Saunders and relief pitcher Jeanmar Gomez for assignment.

With Saunders and Gomez removed from the roster, the Phillies have called up a pair of younger players. Outfielder Cameron Perkins and pitcher Hoby Milner have been added to Philadelphia’s roster.

Heading into the season, both Saunders and Gomez were seen as two veterans who could help the Phillies compete in the short term. Saunders was one of Philadelphia’s biggest offseason acquisitions, signing a one-year, $9 million contract with an option for the 2018 season. Meanwhile, Gomez solidified himself as the team’s closer last season. The Phillies were hoping he’d continue to grow into that role this season. However, both have been utter disappointments in 2017.

Saunders had a breakout season in 2016 with the Blue Jays, posting a .815 OPS last year. He turned that season into a sizable contract with the Phillies. But he’s failed to carry over his success from last year, despite playing in a more hitter-friendly ballpark. Saunders is currently hitting .205 with an OPS of .617. He has just three hits in 31 at-bats during the month of June.

Gomez has been equally disappointing. He struggled from the get-go this season and was soon removed from his post as the team’s closer. Following a DL stint last month, things have not gotten better for Gomez. On the season, he holds a 7.25 ERA. Opposing batters have hit .348 against him.

Despite poor performances from both players this year, it’s still surprising to see teams cut ties with veterans this early in the season. The Phillies still owe Saunders most of the $9 million on his contract for this season. Gomez was making $4.2 million this year, meaning Philadelphia is eating a lot of money to cut these two players so early in the season.

Of course, the Phillies are going nowhere fast. Saunders and Gomez were supposed to help them remain respectable season. But since that hasn’t happened, the club might as well clear the way for younger players to get more playing time, as the rebuilding process continues.

With Saunders gone, Aaron Altherr figures to be the everyday right fielder in Philadelphia. Altherr is in the midst of a breakout season, hitting .278 with 12 home runs. He’s made a strong case for being part of the team’s future. The Phillies also have outfield prospects in Nick Williams, Roman Quinn, and Dylan Cozens who may be called up later in the season.

Both Saunders and Gomez should have a chance to catch on with another team. Despite their struggles this season, both have enough of a track record for a team to take a chance on them, hoping to catch lighting in a bottle. But as underperforming veterans on a rebuilding team, there’s no point in either continuing to play for the Phillies.