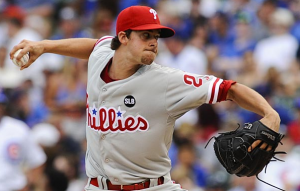 After rough outings in each of his last five starts, the Philadelphia Phillies have decided to skip Aaron Nola’s next start. Nola will not pitch on Thursday as scheduled, meaning he will not pitch again until after the all-star break. The Phillies are hopeful that the extra time off will allow their young pitcher to “clear his head” after the nightmare that has been the last three weeks.

Nola got off to an exceptional start this season, looking as if he was blossoming into one of the leaders of Philadelphia’s rotation for years to come. On June 5, he threw six shutout innings against the Milwaukee Brewers, lowering his ERA to 2.65. But it’s been all downhill since then. In his next four starts, Nola failed to make it out of the 4th inning, allowing 22 earned runs in 13 innings of work over those four starts.

Things were a little better Saturday against the Kansas City Royals, as Nola persevered through early trouble and managed to last five innings, allowing five runs on six hits while striking out seven. Ultimately, he retired the final 10 batters he faced. But he still took the loss, and it wasn’t enough for the Phillies to put him on the mound one more time before the all-star break.

Nola resisted the idea of being skipped in the rotation at first, but he eventually came around to it.”If you ask anybody, we all want to be pitching every fifth day. It’s what they want to do, and I understand. But hopefully it will help,” Nola said. “This is my first full season here, and they want to watch me, but I’m still going to go out and try to throw as many innings as I can.”

The Phillies did something similar with Cole Hamels in 2013. Hamels was 2-11 with a 4.58 ERA around the midway part of the season and after getting some time off posted a 2.68 ERA over his final 16 starts of the season. Philadelphia is hoping for similar results from Nola, who will have roughly two weeks between starts to get things sorted out.

The plan is for Nola to throw a simulated game later this week in lieu of starting Thursday against the Colorado Rockies. Other than that, the Phillies are hoping Nola can rest up, clear his head, and put his recent struggles behind him so he can have a strong second half. It’s likely too late for the Phillies to make any noise in 2016, but the team is expecting Nola to be a big part of their future, and the hope is that a skipped start now can pay off over the long term.