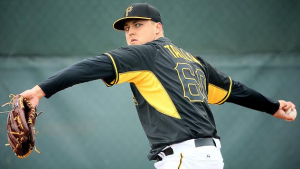 It’s been a long and winding road for Pittsburgh Pirates’ pitching prospect Jameson Taillon during his minor league career, but that road is about to finally lead him to the big leagues. The Pirates announced Tuesday that Taillon will be called up Wednesday to make his major league debut against the New York Mets.

The Pirates and Mets were rained out on Monday, and the two teams are scheduled to play a double-header Tuesday. To avoid one of their starters pitching on short rest following the double-header, the Pirates will call up Taillon to start on Wednesday. He will be opposed by Mets’ ace Noah Syndergaard.

Taillon was the second overall pick in the 2010 draft and appeared to be moving quickly through Pittsburgh’s farm system until he was forced to undergo Tommy John surgery in April 2014. He sat out the entire 2014 season after the surgery and then suffered a hernia while rehabbing, forcing him to sit out the entire 2015 season as well. However, Taillon has remained healthy in 2016 and been nothing short of outstanding at triple-A. In 10 starts, Taillon has posted a 2.04 ERA with 61 strikeouts in 61.2 innings pitched.

After being told he would be making his big league debut, Taillon tweeted: “Used to practice my autograph all day in middle school, and I would dream of making the call to my family and friends. Crazy to think of how many people worked so hard with me and helped me on this journey! But, this journey is still just beginning.”

The Pirates have not said whether or not Taillon would be sent back to triple-A after the start or if he has a chance to push his way into the starting rotation permanently. “This isn’t an opportunity where he needs to come in and just twirl it to stay,” explained manager Clint Hurdle. “There are things in his control. There are things out of his control.”

Last month, Pittsburgh GM Neal Huntington spoke about how the organization would not rush Taillon or Tyler Glasnow, another top pitching prospect, despite their dominance in triple-A this season. If the Pirates stick to that, it’s likely that Taillon will be sent back to triple-A after his start on Wednesday, regardless of how well he pitches. However, outside of Gerrit Cole, the Pirates have not received strong performances from their starting pitches this year, which could leave the door open for Taillon to stay if all goes well on Wednesday.

Both Taillon and Glasnow have the talent to be top-of-the-rotation starters and both appear ready for full-time duty in the majors. Either one could prove to be an impact addition to the Pittsburgh rotation, one that could help the Pirates cut what is currently a 10-game deficit in the NL Central behind the Chicago Cubs. Taillon will get a chance to prove himself on Wednesday, and if the Pirates are smart, they won’t wait too long before Glasnow also gets an opportunity.