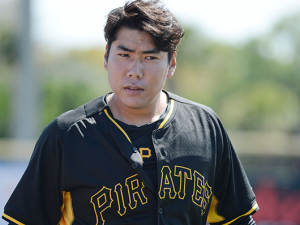 Just when the Pittsburgh Pirates were starting to make a move in the wild card race, they’ve been hit by an injury. Third baseman Jung Ho Kang was placed on the 15-day DL on Saturday, with the Pirates calling up first base prospect Josh Bell to replace him on the roster. Kang hurt his left shoulder while sliding into second base head first Friday night during Pittsburgh’s loss to the Miami Marlins. The Pirates expect him to miss two to four weeks.

This is Kang’s second trip to the DL this season. He missed the first month of the season with a knee injury, only to hit the ground running with a strong performance in May and June. After slumping during the month of July, Kang has started to heat up again in August, and so the timing of the injury is unfortunate for the Pirates. Kang’s July slump coincided with him being accused of sexual assault during a road trip in Chicago. The investigation is still underway and MLB has not yet taken any punitive action against him.

With Kang out, the Pirates are expected to insert Davis Freese at third base, with super-utility man Sean Rodriguez also being an option. Freese has put together a solid season despite not being a full-time player, while Rodriguez is in the midst of the best offensive season of his career, also playing a part-time role. This should put the Pirates in good hands with regard to filling Kang’s absence at third base.

As for Bell, he comes to the big leagues for the second time this season after a nine-day stint with the Pirates last month. According to MLB.com, Bell is Pittsburgh’s third best prospect. He had two hits in three at bats during that call up. Bell was having an exceptional season in triple-A the first half of the year prior to his big league debut. However, he has struggled since being sent down. In August, Bell is hitting just .203.

Even with one of the Pittsburgh’s top prospects getting called up, Pirates manager Clint Hurdle says he’s not guaranteeing a lot of playing time for Bell, as John Jaso should continue to see the majority of the playing time at first base. Bell is a switch-hitter, so he could platoon with Jaso, although Bell is a better left-hand hitter than right-hand hitter, so Hurdle could continue to platoon Jaso and Freese at first base, knowing Rodriguez can play third base on days Freese is at first

Not only is there concern about Bell’s recent struggles in triple-A, but Hurdle has also expressed reluctance to play Bell because of his defense. Bell is inexperienced at first base, playing only in the outfield until last year, and Hurdle says recent reports of Bell’s defense have been far from glowing. The manager adds that unless he can trust Bell’s defense, playing time could be limited.

Even if they don’t get much out of Bell, or give him much of an opportunity, the Pirates should be well set up to survive without Kang, even if he misses a full month. Of course, in such a tight race for the second wild card, any injury could end up making a big difference. The Pirates enter Sunday two games behind the St. Louis Cardinals for the second wild card, with the Marlins and New York Mets also relevant in the race.